In UN headquarters in New York, there was really not much the Secretary General, Dag Hammarskjold, could say in response to Fidel Castro, Cuba’s Prime Minister, as he was setting out to camp in the gardens of the UN building. This was Fidel’s response to a hotel in New York City refusing to let him and his country’s delegation to the 15th Session of the General Assembly, continue to stay there. 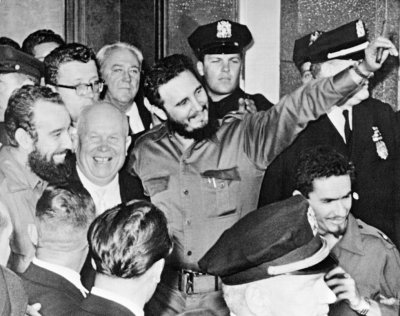 On 18 September 1960, Fidel Castro arrived in New York, leading an official delegation, and armed with an absolute right as a UN member state, to participate in the above-mentioned event at the UN. However, soon after he arrived, the management of Hotel Shelburn, where they were staying, notified him that they were all personae non gratae and had to leave the premises. Government pressure was applied such that no reputable hotel was prepared to open their doors to the Cuban leader.

Before the press, the Commander-in-Chief denounced the aggression that he was being subjected to and publicly declared his irrevocable decision to participate in the General Assembly. It was on this account that he ordered his men to pack rucksacks to set up camp in the gardens of the UN headquarters.

At the time, the security conditions for the Leader of the Island and the rest of the delegation could not be worse in the United States on account of the aggressive escalation of Yankee imperialism against the young Revolution, against which the CIA had declared a war to death and had conceived the first plans to attack the Cuban leader.

This entire climate of insecurity against the delegation was governed by a methodology baptized by the Yankee Centre of Intelligence as “character assassination”. This consisted in applying a series of psychological measures and provocations which it was hoped would make Fidel interrupt his journey. But the US government had grossly miscalculated the extraordinary character of the man they were up against.

For the revolutionary leader forced himself to run a risk and to assert Cuba’s voice in the UN, before campaigns, meshes of lies and statements degrading the Revolution, that had been drawn up by the headquarters of North American propaganda and replicated by the vast majority of media throughout the world. The aim? To create the conditions for attacking the homeland of this Caribbean territory.

Faced with the determination of the Cuban delegation and its leader, ready to camp in tents in the luxurious gardens of the UN, several big hotels agreed to receive the visitors. However Fidel decided to accept the offer made out of solidarity by Love Woods, the owner of Hotel Theresa located in the Negro neighbourhood of Harlem. By doing so, they converted the area surrounding the building into a permanent act of the multitudes that were acclaiming him and it became impossible to control them by implementing the plans the police had drawn up in advance.

At Hotel Theresa, it was the Soviet Premier, Nikita Khrushchev, who greeted the Cuban Prime Minister who then met with countless international and US personalities including the Negro leader, Malcolm X.

On 26 September 1960, Fidel delivered his unforgettable speech before the 15th UN General Assembly. He demonstrated that the US Administration was attacking the Island and was defending the imperialist interests of the huge nationalized consortia; and that in contrast, he supported the causes of the people of the Third World, a statement that engendered the support of most countries in the world.

In part of his speech, Fidel revealed a communication that the Cuban government had sent to the United States on 27 January 1960, in favour of negotiations between the two nations, but which was rejected by the White House. He confirmed that Cuba was ready to negotiate on equal terms the differences between the two states.

55 years had to lapse… a period in which the United States used all the means within its grasp to put an end to the Cuban project. Only then did the previous administration of President Barack Obama recognize that this policy was no good. And yet it appears, that the current leader, Donald Trump, is trying to resuscitate various aspects of it. Donald Trump can expect to fail just as his predecessors did.