Jim Mattis refutes the « Fake News » from Israël and NATO

The Atlantist Press has been claiming for years that President Bachar el-Assad used chemical weapons against his own people. Except that according to US Secretary for Defense, General Jim Mattis, this is fake news. Like Saddam Hussein’s chemical weapons, this story, which has been occupying the columns of newspapers for the last five years, is pure war propaganda. 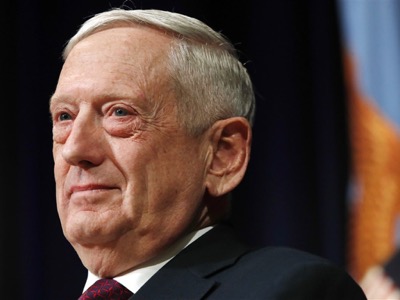 This should have been headline news in all the Western news outlets. But only Newsweek mentioned it [1]. During his Press conference on 2 February, Secretary for Defense General Jim Mattis indicated that while he « thought » that Damascus had used chemical weapons against his own people, no-one in the Pentagon has ever provided the slightest proof.

The journalist, who knows General Jim Mattis personally, heard him declare, off the record, his aversion for the myth of Syrian chemical weapon. He offered him the opportunity to repeat his claim, this time in public. Here is the transcript of this conversation (published a little late).

Jim Mattis : I think so.

Jim Mattis : I believe they have been used several times. And that, as you know, is a rather specific category, that’s why I ruled out sarin as being something different - yeah.

Question : So there is credible proof that sarin and chlorine …

Jim Mattis : No, I don’t have any proof, not specifically. I don’t have proof. What I’m saying is that other groups on the ground, NGO’s, soldiers on the ground, have said that sarin was used. So we’re looking for proof. I have no proof, either credible or non-credible.

At the beginning of the war, the Syrian Arab Republic asked the UNO to come and investigate the use of chemical weapons by the jihadists. The inspectors found nothing convincing. But in August 2013, the states who were supporting the project by the Muslim Brotherhood reversed the accusation and claimed, on the sole basis of information from Mossad Unit 8200, that the Syrian army had just massacred approximately 1,500 civilians in the Ghouta with a mixture of gases, including sarin.

Attesting to the good faith of Syria, Russia proposed that it join the Convention on the Prohibition of the Development, Production, Stockpiling and Use of Chemical Weapons and on their Destruction. Working together, Moscow and Washington destroyed the totality of Syrian chemical weapons and the precursors (which is to say the substances necessary for the manufacture of such weapons).

However, the accusation of the use of these weapons has not ceased. Even though the Pentagon itself had supervised their destruction, the Atlantist Press persisted in pretending that the Syrian Arab Army was using them. Certain medias, like the Anglo-Saxon Bellingcat (whose director is an employee of the Atlantic Council) [2] or the French Le Monde [3] have become professional repeaters of this Fake News.

To put an end to the rumour, a joint system of enquiry was set up by the UNO and the Organisation for the Prohibition of Chemical Weapons (OPCW). After having organised, from New York and Vienna, a vast compilation of information, this authority refused to go and check the information on-site, and even refused to take samples. Tension increased at the Security Council, where anyone could note the influence exercised by the number 2 of the UN administration - neo-conservative Jeffrey Feltman [4] – over US ambassador Nikki Haley. Finally, we counted as many as five Russian vetos against the Western lies on this subject alone [5].

At the moment of the Khan Cheikhoun affair, the United States claimed, straight-faced, that they had proof of Syrian responsibility – proof that, according to General Mattis, had never existed - and punished Syria by bombing the base at Cheyrat.

Secretary for Defense Robert McNamara admitted that the United States lied in order to launch and pursue their war against the Vietnamese people. His successor Colin Powell admitted he had lied to the Security Council in order to launch the war against the Iraqi people. And so on … But they all confessed after having spilled blood and after having left their official functions. None of them faced criminal charges.

Just as in US commercial law, US leaders can go bankrupt, fail to reimburse their creditors and reboot their businesses from zero as if nothing had happened.

For the first time, an incumbent Secretary for Defense has denounced the lies of Israël, his own administration, and NATO. Although he was careful to present himself as being convinced of Syria’s guilt, his declaration refutes the justifications for the Israëli bombing in Syria, allegedly to destroy chemical weapons. For his colleagues Rex Tillerson and Nikki Haley, his stand is irrevocable. It sounds a warning to the 23 Ministers of Foreign Affairs who, on 23 January, once again accused Syria of using chemical weapons [6] – these are Ministers who have spoken in favour of « democracy » in the Levant… on the sole condition that Bachar el-Assad refrains from presenting himself for a Presidential election he could win.

[2] Brown Moses, whose real name is Eliot Higgins, also participates in the association Propaganda or Not?, which accuses various sources, including the Voltaire Network, of being instruments of the Kremlin. Cf. “The NATO campaign against freedom of expression”, by Thierry Meyssan, Translation Pete Kimberley, Voltaire Network, 5 December 2016.

[3] Based on a crudely false résumé, this daily accuses the Voltaire Network of being untrustworthy. Cf. “The truth about « fake news »”, by Thierry Meyssan, Translation Pete Kimberley, Voltaire Network, 16 January 2018.

[6] “International Partnership against Impunity for the Use of Chemical Weapons”, Voltaire Network, 23 January 2018.

The United States are preparing a war between Latin-American states

Mattis thinks that US military occupation in Syria is legal

Nato suspends its operations in Syria