The USA and the EU quarrel, but remain united against Russia and China

It is particularly important, in this period of accelerated evolution of international positions, not to become blinded by one element or another, but to conserve all the elements under close scrutiny. By observing simultaneously the G7, NATO and the OCS, geographer Manlio Dinucci reveals the direction chosen by the Western powers. 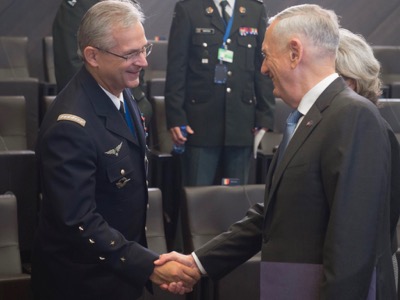 On 8 June 2018 in Brussels, the members of NATO (including 6 members of the G7) handed themselves new means with which to hamper the development of Russia. Present were French General Denis Mercier and the US Defense Secretary General Jim Mattis. At the same time, in Quebec, the members of the G7 were squabbling about customs taxes.

While the G7 is fissuring over the war on customs duties, the same conflicting actors are regrouping to reinforce NATO and its network of partners.

Trump’s tactical proposal to restore the G8 - aimed at harnessing Russia to a G7 + 1, thus separating it from China - was rejected by European leaders and even the EU itself, who fear being overridden by Washinton-Moscow negotiations.

However, the proposition was approved by the new Italian Prime Minister Giuseppe Conte. Trump called him a “good boy” and invited him to the White House.

Nonetheless, this remains a communal strategy. This is confirmed by the latest decisions taken by NATO, whose main members are the United States, Canada, Germany, France, Great Britain and Italy, plus Japan as a partner — in other words, all the powers of the G-7.

The meeting of 29 Defense ministers (for Italy Elisabetta Trenta, 5 Stelle), on June 7, unanimously decided to strengthen the anti-Russisa command structure by more than 1,200 personnel; to set up a new Joint Force Command for the Atlantic, based in Norfolk (USA), against «Russian submarines that threaten maritime communication lines between the United States and Europe»; to set up a new Logistics Command, based in Ulm (Germany), as a "deterrent" against Russia, with the task of "moving troops faster across Europe in any conflict".

"Military mobility" is at the heart of the NATO-EU cooperation, which will be strengthened by a new agreement next July.

By 2020, NATO will deploy in Europe, 30 mechanised battalions, 30 air squadrons and 30 combat vessels, ready to use within 30 days or less against Russia.

To this end, as requested by the US, the European allies and Canada have increased their military spending by 87 billion dollars since 2014 and are committed to increasing it even more. Germany will take it in 2019 to an average of 114 million Euros a day and plans to increase it by 80% by 2024.

Germany, France, Great Britain, Canada and Italy, while they quarrel with the US at the G7 in Canada about customs taxes, in Europe are participating under US command in the Saber Strike excercise which mobilises 18,000 soldiers from 19 countries. The excercise was scheduled between 3 and 15 June in Poland and the Baltic, close to the Russian territory.

The same six members of the G7, plus Japan, will be participating in the Pacific, still under US command, in Rimpac 2018, the largest naval exercise in the world, aimed at China.

In these ’war games’, from Europe to the Pacific, Israeli forces are participating for the first time.

The Western powers, divided by contrasting interests, are composing a united front in order to hold on, by any means necessary – war and more war - to their imperial domination of the world, which is threatened by the emergence of new state and social subjects.

At the same time as the G7 was splitting on the question of customs duties in Canada, China and Russia signed new economic agreements in Beijing. China is Russia’s biggest trade partner and Russia is China’s largest fuel supplier. Trade between the two countries will increase this year to around 100 billion dollars.

China and Russia cooperate in the development of the New Silk Road through 70 countries of Asia, Europe and Africa. The project — which contributes to "a multipolar world order and more democratic international relations" (Xi Jinping) — is opposed by both the US and the European Union — 27 of the 28 EU ambassadors in Beijing (with the exception of Hungary) claim that the project violates free trade and aims to divide Europe.

It is not only the G7, but the unipolar world order imposed by the West, which is under threat.