Expandable and always more expensive, NATO is spreading across Europe

Working like machines programmed from their creation, the administrations of NATO and the EU are pursuing their project free from all political control. The military and civil bureaucracies born of the US occupation of Western Europe are bent on defending the interests of the transnational élite without paying any attention to the wish of the People. 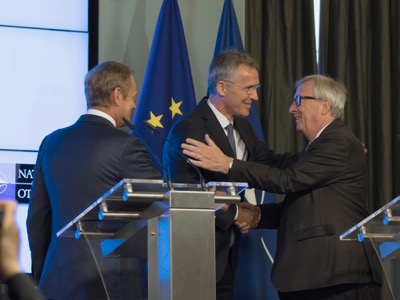 The European Commission and the General Secretariat of NATO imposed the signature of a Joint Declaration before the opening of the summit of the heads of State and governments. Their intent was to lock down the system they manage in order to prevent the elected members from calling it to question.

The NATO summit for the heads of State and governments of the 29 member nations was held in Brussels on 11 and 12 July - in first place, US President Donald Trump, who, only a few days ago, asked the allies to increase the defence of the Atlantic, otherwise, he would « lose patience ». The summit confirms, at the very highest level, the rise in power of the command structure, mainly in its anti-Russian function. There is to be a new Joint Command for the Atlantic at Norfolk USA, to counter the « Russian submarines which are a threat to the lines of maritime communication between the United States and Europe », and a new Logistical Command, at Ulm in Germany, as an anti-Russian « dissuasion », with the mission of « moving troops more quickly across Europe in times of conflict ».

By 2020, NATO will have in Europe 30 mechanised battalions, 30 aerial squadrons and 30 combat ships, deployable in 30 days or less against Russia. President Trump will therefore have stronger cards in his hand at the Bilateral Summit with Russian President Putin, which will be held on 16 July in Helsinki. Whatever the US President presents at the negotiating table, it will profoundly affect the situation in Europe.

NATO – which was created in 1949, six years before the Warsaw Pact, formally on the basis of the principle established in Article 5 – has been transformed into an alliance which, on the basis of the « new strategic concept », engages its member nations to « carry out punitive responses to crises which are not provided for in Article 5, outside of the territory of the Alliance ». On the basis of the new geostrategic concept, the North Atlantic Treaty Organisation has spread as far as the Afghan mountains, where NATO has been at war for 15 years.

What has not changed in the mutation of NATO is the hierarchy within the Alliance. It is always the US President who nominates the Supreme Allied Commander for Europe (« SACEUR »), who is always a US general, while the allies do nothing more than approve the choice. The same thing is true for the other key commands. US supremacy has been reinforced with the expansion of NATO, because the Eastern countries are more closely linked to Washington than to Brussels.

Even the Treaty of Maastricht, in 1992, established the subordination of the European Union to NATO, of which 22 of the 28 countries of the EU are members (with Great Britain on its way out of the Union). It stipulates, in Article 42, that “« the Union respects the obligations of certain member states, who are aware that their common defence is guaranteed by NATO, in the context of the North Atlantic Treaty ». And protocol n°10, concerning the cooperation instituted by Article 42, points out that NATO « remains the foundation of the defence » of the European Union.

NATO’s reach now extends well beyond Europe, which has a series of partners linked to the Alliance by several varied programmes of military cooperation. Amongst the twenty which enter into the Euro-Atlantic Partnership are Austria, Finland and Sweden. The Mediterranean partnership includes Israël and Jordan, which have official permanent missions at NATO headquarters in Brussels, as well as Egypt, Tunisia, Algeria, Morocco and Mauritania. The Gulf partnership includes Kuwait, Qatar and the UAE, which have permanent missions in Brussels, plus Bahreïn. NATO also have nine « World Partners » in Asia, Oceania and Latin America - Iraq, Afghanistan, Pakistan, Mongolia, South Korea, Japan, Australia, New Zealand and Colombia – some of whom « actively contribute to NATO’s military operations ».

Under pressure from the USA, the European allies and Canada have increased their military spending by 87 billion dollars since 2014. Despite that, President Trump will bang on the table at the Summit, castigating the allies because, all counted together, they are spending less than the United States. « All the allies are in the process of increasing their military spending », assures NATO Secretary General Jens Stoltenberg.

The countries which dedicate at least 2% of their GNP to military spending numbered three in 2014 and eight in 2018. We can therefore estimate that between today and 2024, the European allies and Canada will be increasing their military spending by 266 billion dollars, bringing NATO’s total military expenditure to more than 1,000 billion dollars annually. In 2019, Germany will increase its military spending to an average of 114 million Euros per day, and plans to increase it by 80% between today and 2024. Italy has already agreed to increase its spending from the current 70 million Euros per day to about 100 million Euros per day. As required by the organisation which, in the government programme « contract » between the 5 Star Movement and the Ligue, is defined as the « privileged ally of Italy ».