The USA is preparing for a confrontation with Russia and China

The US Commission on the National Defense Strategy was created in 2017 in order to provide Congress with some expertise on the subject. However, its principal source of information is the US Institute of Peace, the equivalent of the NED for the Secretary of Defense. As a result, its bipartisan attitude is in reality the point of view that the Pentagon wants to defend via the Democrat and Republican Parties. 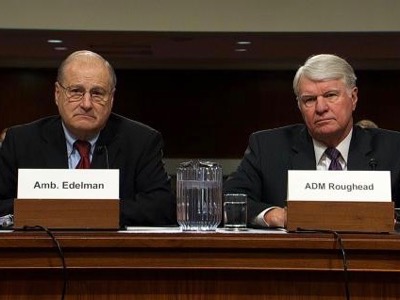 The co-presidents of the Commission - ambassador Eric Edelman and Admiral Gary Roughead.

At first glance, it reads like the script for a Hollywood catastrophe movie. And yet it’s one of the scenarios that is actually being considered in the official 2018 report by the Commision, tasked by the United States Congress with studying the national defense strategy - « In 2019, on the basis of fake news announcing atrocities committed against Russian citizens in Latvia, Lithuania and Estonia, Russia invades these countries. While US and NATO forces prepare to respond, Russia declares that an attack against its forces in these countries would be viewed as an attack on Russia itself, and considers a nuclear riposte. Russian submarines attack transatlantic optical fibre cables, and Russian hackers cut the electrical networks in the USA, while Russian military forces destroy US military and commercial satellites. The major citites of the United States are paralysed, since the Internet and cell-phones are rendered inoperative ».

The bipartisan Committee, composed of six Republicans and six Democrats, are looking at a similar scenario in Asia - in 2024, China stages a surprise attack and occupies Taiwan, and the United States are unable to intervene in a cost-effective manner, because Chinese military capacities have continued to grow, while those of the USA have stagnated due to insufficient military spending.

« These scenarios – explains the Commission - exemplify the fact that the security and the well-being of the United States are in greater danger than they have been for the last few decades ». Since the Second World War, « the United States have guided the construction of a world of unusual prosperity, freedom and security. This development, from which it has benefited enormously, has been made possible by the unequalled military might of the United States ».

For the moment, however, their military power - « the backbone of world influence and the national security of the USA » - has eroded to a dangerous level. This is due to the fact that « concurrent authoritarian forces - especially China and Russia – are in the process of seeking regional hegemony and the means with which to project their power on an international scale ». This would be a tragedy of unimaginable dimensions, but perhaps terrible – warns the Commission – if the United States should allow their own national interests to be compromised by a lack of the will to make « hard choices and the necessary investments ». They therefore propose an ulterior increase of US military spending (which today is already equivalent to a quarter of the federal budget) of between 3 and 5 % annually – particularly to increase the deployment of US forces (submarines, strategic bombers, long-range missiles) in the Indo-Pacific region, where « four or five of our adversaries are active - China, North Korea, Russia and terrorist groups, (the fifth being Iran) ».

The strategic vision which emerges from the Congressional report – even more worrying when we note that the Commission is composed of equal numbers of Republicans and Democrats – leaves no room for doubt. The United States – which, since 1945, has provoked wars causing between 20 and 30 million deaths (plus the hundreds of millions caused by the indirect effects of these wars) to « guide the construction of a world of unusual prosperity, freedom and security, from which it has benefitted enormously » is now preparing to do anything necessary to maintain its « unequalled military power » upon which their empire is founded, but which is now beginning to crumble with the emergence of a multipolar world.

For this purpose, the Congressional Commission is examining scenarios of aggression against the United States, which are no more than the mirror image of their own aggressive strategy, which runs the risk of dragging the world into catastrophe.