France: the Socialist Party promises it will eliminate pro-Arab diplomats 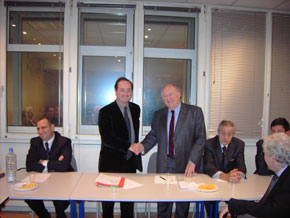 A delegation of the French Socialist Party, led by its first Secretary François Hollande, participated in the Direction Committee of the Representative Council of Jewish Institutions of France (CRIF) on November 30, 2005. However, decisions taken during this meeting were only made public recently.

Following the guidance of former socialist minister Jack Lang, who used to write a column for the Figaro “Etre de gauche, soutenir Sharon” in August 2005, Hollande said he was more than satisfied with the policy of Israeli Prime Minister and the unilateral withdrawal from Gaza whereas he was against the policy of Iran’s President Ahmedinejad and that of his Syrian counterpart, Bashar Al-Assad.

He also criticized France’s foreign policy and promised he would purge the French Ministry of Foreign Affairs of its pro-Arab elements and prevent the arrival of pro-Arab citizens to high public posts.

“There’s a tendency whose origins can be found in the past, what’s been called the Arab policy of France, and to have an ideology is unacceptable for an administration. There’s a recruiting problem at the Ministry of Foreign Affairs and the National School for Administration and such recruitment should be reorganized”, he stated.