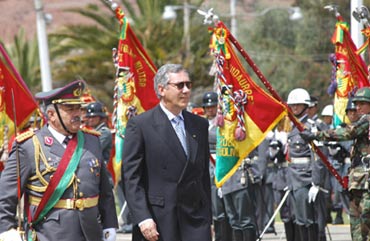 Interim president Eduardo Rodriguez, (right on photo) who waits for the swearing-in of new president Evo Morales, had to accept the resignation of Defence Minster Gonzalo Mendez and the Commander of the Army Marcelo Antezana (left on photo), in view of “irregularities” in the destruction of the Bolivian missiles by the United States. In doing so, he confessed to have had authorized the destruction of such missiles, but not their transfer. “Washington requested the repatriation of its missiles to US territory in order to destroy them since the United States feared that Morales won the presidential elections”, said ex-general Marcelo Antezana in statements to a local radio station before he backed down. During the December 2005 elections, Evo Morales, presidential candidate, had filed a complaint against Eduardo Rodriguez who had authorized the transfer of the missiles. Bolivia’s disarmament makes it possible for a US airborne intervention to overthrow President Morales.