A recent major oil and gas find is bound to change dramatically the geopolitical equation in the Eastern Mediterranean region and beyond. To start with, it has sent Israel from rags to riches in terms of energy independence and security. However, Lebanon contends that part of the gas field lies within its territorial waters, and Washington happens to agree. Engdahl explores the implications of this key development, which have already rippled into the U.S. electoral scene, with Netanyahu betting on Republican race horses against Obama.

The Tamar natural gas field off the coast of northern Israel is expected to begin yielding gas for Israel’s use in late 2012.

Recent discoveries of not just significant, but huge oil and gas reserves in the little-explored Mediterranean Sea between Greece, Turkey, Cyprus, Israel, Syria and Lebanon suggest that the region could become literally a “new Persian Gulf” in terms of oil and gas riches. As with the old Persian Gulf, discovery of hydrocarbon riches could as well spell a geopolitical curse of staggering dimension.

Long-standing Middle East conflicts could soon be paled by new battles over rights to oil and gas resources beneath the eastern Mediterranean in the Levant Basin and Aegean Sea. Here we explore the implications of a gigantic discovery of gas and oil in offshore Israel. In a second article we will explore the implications of gas and oil discoveries in the Aegean between Cyprus, Syria, Turkey, Greece and Lebanon.

The game-changer was a dramatic discovery in late 2010 of an enormous natural gas field offshore of Israel in what geologists call the Levant or Levantine Basin. In October 2010 Israel discovered a massive “super-giant” gas field offshore in what it declares is its Exclusive Economic Zone (EEZ).

The find is some 84 miles west of the Haifa port and three miles deep. They named it Leviathan after the Biblical sea monster. Three Israeli energy companies in cooperation with the Houston Texas Noble Energy announced initial estimates that the field contained 16 trillion cubic feet of gas—making it the world’s biggest deep-water gas find in a decade, adding more discredit to “peak oil” theories that the planet is about to see dramatic and permanent shortages of oil, gas and coal. To put the number in perspective, that one gas field, Leviathan, would hold enough reserves to supply Israel’s gas needs for 100 years. [1]

Energy self-sufficiency had eluded the state of Israel since its founding in 1948. Abundant oil and gas exploration had repeatedly been undertaken with meager result. Unlike its energy-rich Arab neighbors, Israel seemed out of luck. Then in 2009 Israel’s exploration partner, Noble Energy, discovered the Tamar field in the Levantine Basin some 50 miles west of Israel’s port of Haifa with an estimated 8.3 tcf (trillion cubic feet) of highest quality natural gas. Tamar was the world’s largest gas discovery in 2009.

At the time, total Israeli gas reserves were estimated at only 1.5 tcf. Government estimates were that Israel’s sole operating field, Yam Tethys, which supplies about 70 percent of the country’s natural gas, would be depleted within three years.

With Tamar, prospects began to look considerably better. Then, just a year after Tamar, the same consortium led by Noble Energy struck the largest gas find in its decades-long history at Leviathan in the same Levantine geological basin. Present estimates are that the Leviathan field holds at least 17 tcf of gas. [2] Israel went from a gas famine to feast in a matter of months.

With the Tamar and now Leviathan discoveries, Israel was beginning to discuss how to become a major natural gas export nation as well as whether to significantly tax gas and oil revenues and place it into an Israeli Sovereign Wealth Fund that would make long-term investments in the Israeli economy as China and many Arab OPEC nations do. [3] 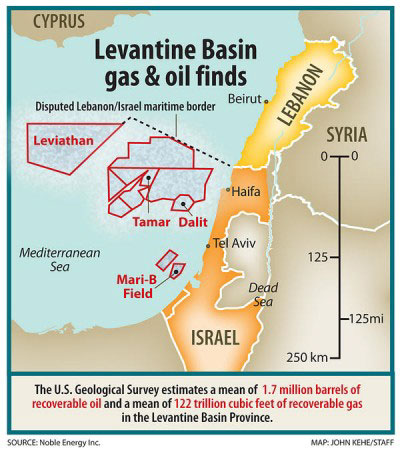 “The Levant Basin Province is comparable to some of the other large provinces around the world,” noted a spokesperson from the US Geological Survey’s (USGS) Energy Resources Program. “Its gas resources are bigger than anything we have assessed in the United States.” [4]

Perhaps sensing that major oil and gas discoveries were being confirmed with potential to change the geopolitics of the entire region, the USGS launched its first-ever estimate of the total reserves of oil and gas in the broad region encompassing the Eastern Mediterranean including the Aegean Basin offshore Greece and Turkey and Cyprus, the Levant Basin offshore Lebanon, Israel and Syria, and the Nile Basin offshore Egypt. Their conclusion was impressive to put it mildly.

The USGS, using all data from previous drilling and geologic surveys of the region concluded, “undiscovered oil and gas resources of the Levant Basin Province amount to 1.68 billion barrels of oil, and 122 tcf of gas. Additionally, according to USGS estimates, “undiscovered oil and gas resources of the Nile Delta Basin Province (bounded by the Nile Cone to the west, by Strabo to the north, by the Pytheus and Cyprus Trenches to the east and by the Levant Basin to the south) are estimated to be approximately 1.76 bbl (of oil), and 223 tcf of natural gas.” [5]

The USGS calculated the total for the eastern Mediterranean as a whole currently at 345 tcf of gas and 3.4 billion barrels of oil. Suddenly the entire region is facing completely new geopolitical challenges and conflict potentials.

To put the numbers into perspective, the USGS estimates that Russia’s West Siberian Basin, the world’s largest known gas basin, holds 643 tcf of gas. As well, the Middle East and North Africa regions have several natural gas-rich areas, including the Rub Al Khali Basin (426 trillion cubic feet) in southwestern Saudi Arabia and Northern Yemen; the Greater Ghawar Uplift in eastern Saudi Arabia (227 tcf) and the Zagros Fold Belt (212 tcf) along the Persian Gulf and into Iraq and Iran. [6]

Just months earlier, securing foreign gas was a national security priority of Israel as existing domestic gas supplies dwindled dangerously low. Further adding to the energy crisis were the so-called Arab Spring protests sweeping across Egypt into Libya in early 2011. The revolts toppled Mubarak, under whose regime Egypt had supplied some 40% of Israeli natural gas. With Mubarak toppled and the ban lifted on Egypt’s Islamic parties, especially the Muslim Brotherhood and the radical Salafist Al-Nour Party, the gas pipeline delivering Egypt’s gas to Israel was target of repeated sabotage and disruptions, the most recent February of this year in northern Sinai. Israel was becoming more than nervous about its future energy security. [7]

Discovery of Leviathan by Israel in the waters offshore immediately triggered a new geopolitical conflict as Lebanon claimed that part of the gas field lay in Lebanese territorial waters in Lebanon’s Exclusive Economic Zone (EEZ). Lebanon delivered maps to the UN to back its claim, to which Israeli Foreign Minister Lieberman retorted, “We won’t give an inch.”

The fly in the Mediterranean energy soup is the fact that Israel, like the USA, has never ratified the 1982 UN Convention on Law of the Sea dividing world subsea mineral rights. The Israeli gas wells at Leviathan are clearly within undisputed Israeli territory as Lebanon affirms, but Lebanon believes the field extends over into their subsea waters as well. The Lebanese Hezbollah claims that the Tamar gas field, which is due to begin gas deliveries by the end of this year, belongs to Lebanon.

Washington has lost no time adding political gasoline to the natural gas dispute between Lebanon and Israel. In July of 2011 as Israel prepared to submit its own proposal to the UN as to where the offshore demarcation line between Lebanon and Israel should run, Frederick Hof, US diplomat responsible for special affairs regarding Syria and Lebanon, told Lebanon that the Obama Administration endorsed the Lebanese document, adding to the growing tensions reported since outbreak of the Arab Spring between Israeli Prime Minister Benjamin Netanyahu and Obama. [8]

Netanyahu has reportedly recently urged America’s eighth wealthiest person, his close friend Las Vegas casino billionaire Sheldon Adelson to pour millions directly into the campaigns of Republicans, including Newt Gingrich and Mitt Romney. It represents an unprecedented direct Israeli intervention into US presidential candidates’ campaigns, in order to try to defeat a second Obama term. [9] New issues of control of the vast energy reserves being discovered off Israeli and Lebanese, Cypriot, Turkish and Greek shores will clearly play a growing role in one of the most entangled political regions on Earth.

In our next piece the added complication of oil and gas discoveries in the Aegean Sea will be examined.