Secretary of State Hillary Clinton and an areopagus of multinational bosses have made a long journey through Africa, from July 31st to August 10th, 2012, during which she endlessly boasted of the altruism and philanthropy of the United States. It was a grotesque masquerade as outlined by Manlio Dinucci, in terms of Washington’s disastrous colonial record and that of its corporations on the black continent. 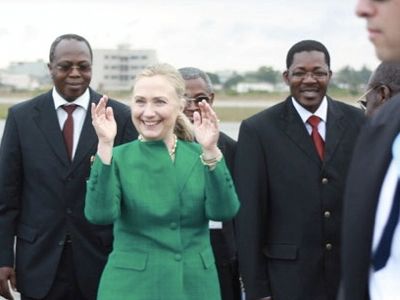 Secretary of State Hillary Clinton thus went to Africa, in the middle of August, to do good works. She was accompanied in her noble mission by the executives of the largest U.S. corporations. Business, yes, but driven by ethical principles that Clinton characterised in the following terms in Dakar: "The days of having outsiders come and extract the wealth of Africa for themselves leaving nothing or very little behind should be over in the 21st century. "

Clinton, it is known, is a wholehearted supporter of fair and equitable trade. Like that which is practiced in Nigeria, whose oil industry is dominated by U.S. companies bringing home half of the extracted crude amounting to more than 30 billion dollars annually. For multinationals and the Nigerian elite in power, it’s a source of enormous wealth, of which there remains almost nothing for the common people. According to the World Bank, more than half of Nigerians live below the poverty line and the average life expectancy is barely 51 years. Oil pollution caused by Shell has devastated the Niger Delta. To decontaminate it, according to a UN report, would require at least 25 years and billions of dollars.

The same fate is in store for South Sudan where, after the US-supported secession, 75% of Sudanese oil reserves are concentrated, not to mention valuable raw materials and vast farmlands. The Texas based Nile Trading and Development Company, chaired by former U.S. Ambassador E. Douglas grabbed 400 000 hectares of the best land, including the resource extraction rights (including forests) for 49 years in exchange for a handout of $ 25 000.

The fertile land grabbing in Africa following expropriation from local populations has become a lucrative financial business, managed by Goldman Sachs and JP Morgan, upon which even Harvard and other prestigious U.S. universities speculate with their funds.

The U.S. economic strategy however, is meeting a formidable obstacle in Africa: China, which, through favorable conditions for African countries, has built ports and airports, roads and railways. To overcome this obstacle, Washington plays its wild card: African Command (AfriCom), which "protects and defends the national security interests of the United States, strengthening the defense capabilities of African states." In other words, relying on military elites (the Pentagon is trying to recruit them with training, weapons and dollars) to bring the greatest possible number of countries into Washington’s orbit.

When all else fails, Africom "leads military operations to provide a secure environment appropriate for good government." Example: Operation Odyssey Dawn launched by AFRICOM in March 2011, which marked the beginning of the war to overthrow the government of Libya (the African country with the largest oil reserves) and stifle financial institutions of the African Union, born primarily from Libyan investments.

Thus there is now in Libya, a "good government" obeying orders from Washington.