Jihadists in the service of imperialism

Western governments no longer hide the fact that they’re using jihadists - NATO overthrew Mouamar el-Kadhafi by using al-Qaïda as its its only ground forces; Israël displaced the UN Forces to Golan, and replaced them with al-Nosra; the international anti-Daesh Coalition allowed Palmyra to fall in order to cause more problems for Syria. But while we can understand Western interests, we fail to grasp why and how the jihadists can serve Uncle Sam in the name of the Coran. 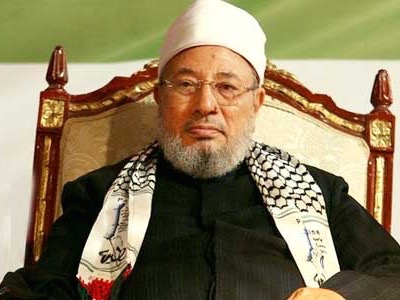 Cheikh Youssouf al-Qaradawi, the Muslim Brotherhood’s star preacher and tele-Coranist on al-Jazeera. He blesses the jihadists in Syria and Iraq, and affirms, deadpan, that if Mohammed was alive today, he would be a NATO ally.

We often ask ourselves how the Pentagon and the CIA manage to manipulate millions of Muslims and send them off to fight for Uncle Sam’s interests. Of course, it’s true that certain leaders are paid agents, but all jihadists believe that they’re fighting and dying in order to gain access to Paradise. The answer is childishly simple – using the rhetoric of the Muslim Brotherhood as a start, it’s possible to evade human reality and send them to kill anyone you like as long as you wave a red flag at them.

Officially, the Islamic Emirate no longer recognises the authority of Ayman al-Zawahiri, and has therefore left al-Qaïda. Nonetheless, in many places, like the Qalamun mountains, it is still impossible to distinguish between them, since the same jihadists claim allegiance to both flags at once.

Of course, one could argue that this is only a personal quarrel - Abu Bakr al-Baghdadi simply wants to replace the current leader. But while the two organisations have exactly the same practices, they develop very different dialogues.

They share the slogans of the Muslim Brotherhood - « The Coran is our Constitution », « Islam is the solution ». A life of holiness is therefore very simple. It doesn’t really matter if the Creator has made us all intelligent, we must, in all cases, apply the Word of God like a machine. And when the situation is not dealt with in the Book, we should just smash it to pieces. The result is obviously catastrophic, and nowhere have these organisations been able to set up even the beginnings of the perfect society that they hope for.

History demonstrates their differences. From 1979 to 1995, in other words, from the CIA operation in Afghanistan to the Popular Arab and Islamic Congress in Khartoum, Oussama Ben Laden’s mercenaries fought the Soviet Union with public aid from the United States. From 1995 to 2011, in other words, from the Congress in Khartoum to operation « Neptune’s Spear », al-Qaïda took position against « Jews and Crusaders » while continuing its struggle against Russia in Yugoslavia and Chechnya. And since 2011, in other words, since the « Arab Spring », it has supported NATO in Libya and Israël at the Golan frontier. Generally speaking, Western public opinion has not kept up with this evolution. It remains convinced of the danger of a mythical Russian expansionism, persists in blaming the jihadists for the attacks of September 11th, has not realised what happened in Libya and at the Israeli frontier, and maintains the false idea that al-Qaïda is an anti-imperialist terrorist organisation. As for the Arabs, they do not base themselves on facts, but choose, according to the situation, between reality and Western propaganda so as to invent a romantic narrative for themselves.

From its side, the Islamic Emirate is moving away from the Coran and closer to the neo-conservatives. It claims that the main enemies are other Muslims – the Chiites and their allies. It has clearly forgotten the Bosnian episode during which Ben Laden’s Arab Legion were supported both by the United States, Saudi Arabia and Iran. But who are the allies of the Chiites? The Syrian Arab Republic (secular) and the Palestinian Islamic Jihad (Sunnite). In other words, the Islamic Emirate is fighting in priority against the Axis of Resistance to imperialism. De facto, it confirms that it is an objective ally of the United States and Israël in the « Greater Middle East », even though, theoretically, they are the enemy.

The malleability of these two organisations resides in their basic ideology, that of the Muslim Brotherhood. It is therefore logical that almost all of the jihadist leaders, at one time or another, have been members of one branch or another of the Brotherhood. By the same token, it is logical that the CIA has not only supported the Muslim Brotherhood in Egypt, since their reception at the White House by President Eisenhower in 1955, but also all its foreign branches and all the dissident groups. Finally, the califat that Hassan el-Bana dreamed about and that Ayman al-Zawahiri and Abu Bakr al-Baghdadi pretended to want, is not the reproduction of the Golden Age of Islam, but the reign of obscurantism.

This was confirmed by Laurent Fabius in 2012, in other words, before the split between al-Qaïda and Daesh, when he declared: « On the ground, they’re doing a good job! »