After the reintegration of Crimea in Russian territory, the United States has pressured regulatory authorities of the European Union to restrict the access of Russia to SWIFT, the system of international payment founded by 200 Anglo-Saxon banks in the decade of the 1970s. In response, the government of Vladimir Putin has established an alternative system of payments that has already begun to extend its operations among Russian banks and, let it be said in passing, has served as an inspiration for China as well as the other countries that make up BRICS. 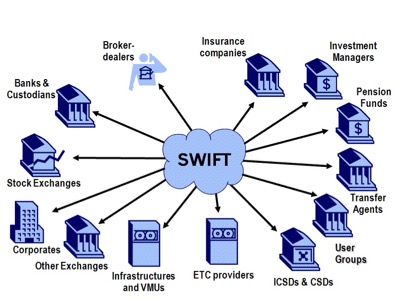 The unipolarity of the United States in the world financial system is rapidly fading. As a consequence of their political near-sightedness, Washington has obliged other countries to establish instruments of financial cooperation that abandon the use of the dollar, as well as multilateral institutions that are no longer guided by the rules imposed by the US Treasury Department [1].

The fact is that finances and money have been utilized as instruments of foreign policy, that is, as mechanisms of global domination that look to undermine both geopolitical adversaries (Russia) as well as rising economic powers (China) that resist submitting themselves to the North American yoke.

Faced with the impossibility of establishing their strategic objectives through diplomacy, the United States is engaged in a financial war, either through economic embargoes, speculative attacks, freezing bank accounts of politicians and businessmen, etc.

In open violation of the principles of international law, Washington aims its artillery at countries that make up the so-called “axis of evil”: North Korea, Iran, Syria, Sudan, etc. Their modus operandi consists in strangulating the economy of the country involved in order to provoke a change of regime [2].

Now this same strategy is directed against the Government of Vladimir Putin. After the reintegration of the Republic of Crimea and the city of Sevastopol to Russian territory –upheld in the referendum celebrated in March of 2014– the United States, the United Kingdom and Poland pressured the European Union to expel Russia from the Society of World Interbank Financial Telecommunications (SWIFT) [3].

Founded in 1973 in the city of Brussels, Belgium, SWIFT is an international system of communications that allow banks to realize electronic transferences among themselves. Before its establishment, financial entities were limited to communicate through Telex and bilateral telephone systems.

In this sense, SWIFT constituted a high level technological advance, given that it allowed both an increase in the speed of trade and world investment, as well as diminishing the costs of transaction in an unprecedented scale.

At the present time, SWIFT is utilized by 10,500 banks – above all US and European – in more than 200 countries. In their day of greatest apogee in 2015 they processed 27.5 million orders of payment.

SWIFT is a “technical” mechanism, purely “neutral” according to the magnates of Wall Street and the City of London. Nevertheless, the attacks of September 11 on the Twin Towers led the United States to involve itself in the system of payments: the Treasury Department since then demanded “specific information” with the excuse that they would “monitor” the channels of financing of “terrorist groups”.

In this way, with the argument that they were involved in illegal activities the Iranian banks were disconnected from SWIFT three years ago, a situation that left the provision of credit for foreign trade for the Persian country in an awkward predicament.

At the same time, Washington opened the way for the National Security Agency (NSA) to be involved. According to the revelations of Edward Snowden ‘Follow the Money’ is the name of the specialized programme of the NSA that is charged with spying on the global financial system [4].

The following [of money] realized by the personnel of the NSA ended with the establishment of a data base ‘TRACFIN’ that in 2011 contained at least 180 million registers of operations among banks, credit card transactions and, obviously, thousands of messages in the SWIFT system.

Hence the United States undertook a quasi monopolistic control of the system of international payments in order to asphyxiate their rivals. To date the disconnection of SWIFT had not been implemented against Russia because of a “lack of authority” on the part of the regulatory authorities. It is one thing to chastise a regional power, and quite another to take on a face to face battle with a world power.

With all that, the constant threats from the United States and their European allies led the Government of Vladimir Putin to establish an alternative system of payments. More than 90% of the Russian banks operations are cross-border, so that if the expulsion of Moscow from the SWIFT system were realized, the consequences for the world economy would have been catastrophic [5].

The principal Russian banks (Sberbank, VTB, Gazprombank, Bank of Moscow, Rosselkhozbank, etc.) have already entered bilateral agreements and fully use the new system of payments, according to Olga Skorobogatova, the vice-governor of the central bank [6].

The new system of transactions diminished the costs in comparison with SWIFT, and more importantly, gave Moscow greater political autonomy and economic security in case of a new rise in sanctions. In addition, the Russian initiative unleashed the construction of alternative systems of payment in other parts of the world.

On the one hand, China is ready to move in coming weeks with their own system of transactions [7]. On the other, the members of BRICS (Brazil, Russia, India, China and South Africa) are discussing the possibility of launching a multilateral system of payments, that is, that not only Russia and China would benefit, but the system of payments would undertake operations among all members of the block [8].

The plan orchestrated from Washington and Brussels against Russia ended with a ‘boomerang effect’, since it not only involved the expulsion from SWIFT, but Moscow established an alternative system that completely neutralized the attempts of destabilization and in parallel, served as the inspiration for the BRICS countries and will soon serve the majority of emerging economies.