Towards peace in Syria without armed opposition

The Geneva 3 negotiations for peace in Syria have just begun, after the pro-Saudi opposition finally submitted to the demands of the US State Department and agreed to participate. However, observes Thierry Meyssan, while Washington and Moscow were hoping for a rapid peace agreement in December, and adopted Resolution 2254, the United States are now convinced that the leaders chosen by Riyadh are incapable of exercising power. 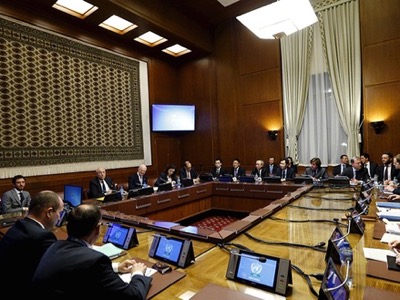 The negotiations scheduled by the UN Security Council for the resolution of the Syrian conflict should begin in Geneva today, the 1st February 2016, a week late. Contrary to what the neo-conservatives and the liberal hawks had hoped at the beginning of the war, this meeting is not convened in order to implement the capitulation of the Syrian Arab Republic and replace it with a « transitional supervisory body » dominated by the Muslim Brotherhood, but to negotiate a cease-fire, then organise the composition of a new constitution and elections open to all.

Firstly, the very principle of negotiations under the patronage of the UNO was questioned as from the publication of information on the secret role – on-going since 2005 – of the UN Assistant General Secretary, Jeffrey Feltman, and his expert, the German academic Volker Perthes [1]. Indeed, it seems that the United Nations is not a neutral organisation, but is actually participating in the conflict. It was the UN which organised the Mehlis Commission and the Special Tribunal for Lebanon, tasked with accusing, judging and condemning Presidents Émile Lahoud and Bachar el-Assad for the assassination of the ex-Prime Minister of Lebanon, Rafic Hariri. It was the UN which paid false witnesses and created a Tribunal without the approval of either the Government or the Parliament of Lebanon, and then refused to make public their report on the reconstitution of the assassination. Again, in July 2012, it was the UN which drew up the Perthes-Feltman Plan for the total and unconditional capitulation of the Syrian Arab Republic, and then hindered the negotiations in the hope of allowing time for a clear victory of the jihadists.

The fact that Russia and the United States chose not to divulge the Perthes-Feltman Plan, but had nonetheless been unable to contain the bellicose actions of the General Secretary of the United Nations, did, on the one hand, save the institution of the United Nations Organisation from an existential crisis, but on the other, caused it to lose all credibility, at least as far as the Syrian question is concerned.

De facto, the opponents of the Syrian Arab Republic know that the UN organisers are now useless allies, because they labour under the pressure of Russia and the United States. And inversely, the Syrian delegation will always retain the possibility of refusing an agreement which could be imposed on the motive of previous secret actions by the UN organisers.

This is why Geneva 3 looks like a Russo-US arrangement, rather than a UN initiative.

The new leaders of the opposition have marginalised themselves

Secondly, the United States, who until now wanted to destroy the Syrian Arab Republic, or at least force it to a compromise, no longer have any interest in doing so. As the Rand Corporation analysed it a full year ago, any government other than the present one would be worse for both Moscow and Washington.

Indeed, at the beginning of the war, the opposition was represented by intellectuals whom the CIA had corrupted during the preceding years, and by the Muslim Brotherhood, who had been working for Langley since at least 1953. This is no longer the case. The intellectuals, who had the capacity to govern, were obliged to leave their place to warlords recruited and financed by Saudi Arabia. But the Saudi kingdom is a tribal régime which accepts only relations of a tribal « lord-vassal » nature. It therefore chose its warlords according to their ethnicity or their tribal origin. After several years, even those who originated from urban families returned to tribal behaviour. By doing so, they are now no longer representative of anyone but the nomads of the Saudi-Syrian desert. As for the Muslim Brotherhood, they were unable to hold on to power in Tunisia and Egypt. Consequently, they are not considered by Washington to be capable of governing a country.

The nomination by Riyadh of a President and a spokesman for the Negotiations Committee chosen among the ex-Ba’athist ministers, was not enough to mask the real presence of tribal warlords.

This, by the way, is one of the lessons of this war – the unnatural alliance of the Western powers and the Saudis has hit a cul-de-sac. What was tolerable for the Saudis in their own country is not so abroad. The expansion of Wahhabism is now causing problems for Europe on its own territory, and the advent of tribalism in the Near East would be a catastrophe for all, since it would mean the « somalisation » of the region. This was without doubt the objective of the Straussians, but it is no longer the goal of President Obama. It can not be stressed strongly enough that modern States are absolutely incompatible with tribal societies, which is what led all modern states to settle their population.

Can Damascus manage reconciliation without Geneva 3 ?

Thirdly, the Syrian Arab Republic, which was obliged to negotiate in 2012 in order to survive, no longer suffers this constraint. Everywhere in Syria, except for the north-east, the Syrian Arab Army is winning back the territory that it had lost. It is going to Geneva only because it is convinced of the necessity of reconciliation with the 10 % of its population which supported the Muslim Brotherhood.

Considering the absence of the delegation from the opposition during the whole of last week, Damascus has been reviewing other options. It does not need the major powers in order to conclude local agreements of reconciliation, and could probably manage this on the national level if the opposition agreed to renounce their plan to « overthrow the régime ».

In conclusion, the Geneva negotiations can only lead to the integration of opposition factions in a government of national union. However, this remains impossible if we account for the positions of the sponsors of this opposition (Saudi Arabia, Turkey and Qatar). In the current configuration, nothing practical can result from such discussions.

The team of negotiators from the United Nations (Jeffrey Feltman, Staffan De Mistura and Volker Perthes) has lost its appearance of neutrality since the revelation of its secret engagement against the Syrian Arab Republic.

The opposition sponsored by Saudi Arabia, despite two figureheads, is now composed uniquely of warlords from the Saudi-Syrian tribes, which disqualifies them from pretending to represent the Syrian people as a whole.