The announcement of the partial withdrawal of the Russian Army from Syria has spawned a great number of commentaries which illustrate the preconceived bias of their authors rather than reality. Thierry Meyssan points out that the facts demonstrate not only that the differences between Moscow and Damascus have been resolved, but that Russia – which managed to topple the Western powers into the anti-terrorist camp – intends to allow Syrians to liberate their territory by themselves. 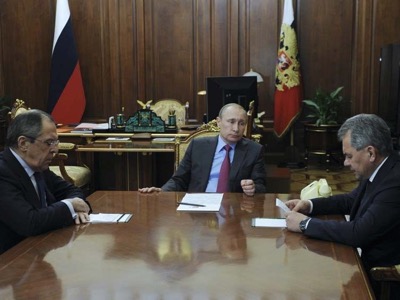 The announcement by the Russian President of the «withdrawal of the main group of its contingent» [1] has provoked a new campaign of disinformation. According to the Western and Gulf Press, Vladimir Putin had been «irritated» by the uncompromising attitude of President Bachar el-Assad, and decided to leave Syria in order to make him face up to his own responsibilities. The same commentators add that since he has no allies left, al-Assad will have to make concessions in Geneva, and abandon his country. Moscow would therefore have offered a wonderful gift to Washington for its five years of «civil war».

However, all this is absurd.

1- The Russian military intervention was first negotiated in 2012 by General Hassan Tourekmani, but was only implemented three years later, since Moscow wanted to make the final adjustments to its new weaponry before deployment. Russian troops began to set up in July 2015, and we were the first to announce it. Our information was immediately picked up by the Israëli Press, then by the international media [2]. It was agreed that the bombing campaign would begin after the meeting of the Security Council, which was to take place alongside the UN General Assembly, and last until the Orthodox Christmas, on the 6th January 2016.

It was also planned that once peace had been re-established, a force from the CSTO would be deployed in order to maintain it – however, this has so far been impossible.

2- However, in view of the White House’s difficulty in controlling its allies, the bombing campaign was extended until the Geneva negotiations began again on the 15th March. It goes without saying that Russia never took this date as the anniversary of any pseudo-revolution. Everything began on the 12th December 2003, with the promulgation by George W. Bush of the declaration of war (Syria Accountability Act), then continued year after year (the Arab League summit in Tunis, 2004, concerning the forced «democratisation» of Lebanon and Syria, the assassination of Rafic Hariri in 2005 and the accusations that Presidents Lahoud and el-Assad had ordered it, the invasion of Lebanon in 2006, intended to provoke the Syrian intervention, the creation of the National Salvation Front by the Muslim Brotherhood in 2007, the destruction of Hezbollah’s communication systems and supply networks in 2008, etc.) and the commencement of hostilities on Syrian territory in 2011, up until today.

3- Russia has begun the withdrawal of its contingent quite conspicuously. Flight plans have regularly been registered four days in advance for all cargo planes charged with transporting men and equipment back to Russia. As for the date itself, it was no surprise. The Jordanian Chief of Staff, General Mishal Al-Zaben, had been informed in January in Moscow, by the Russian Minister of Defence Sergei Shoigu and his Syrian counterpart General Fahd Jassem Al-Freij [3]. It is therefore ridiculous to link this decision to any supposed disagreement that may have occurred over the last few days.

The political differences have been resolved. The first disagreement concerned the Russian proposition for a federal system – rejected by both Damascus and Riyadh – which had its roots in the Soviet experience. However, the minorities of the Near East – contrary to those of the ex-USSR – are intermingled, and speak the same language. The second concerned the general elections of the 13th April, which the Russians wanted to postpone in order to include them in the Geneva negotiations, while Damascus refused to violate the Constitution.

4- From the military point of view, the Russian Army is withdrawing from the battlefield, but not from military headquarters. There is no longer much point in accumulating planes, because there are few targets left to hit – the fortifications built by the jihadists and their networks for the transport of stolen oil have been destroyed. On the other hand, the anti-aircraft systems - S-400 and Pantsir-S2 missiles – are staying where they are. The supply of weapons and munitions continues, as does the access to Russian satellite intelligence. Russia has renewed the equipment and trained soldiers of the Syrian Arab Army, which had been under embargo for the last 10 years [4]. From now on, the Army is not only capable of defending its population from the jihadists, but also of liberating the occupied territory, which it has begun to do. In this case, Russian aid consists not of simple bombing raids, but air support for the ground troops, as we saw yesterday in Palmyra.

After having invested hundreds of billions of roubles in Syria, Russia is not leaving the Near East at a time when Turkey, Saudi Arabia and Lebanon are on the brink of civil war. It is leaving the Syrians to the glory of their Victory.