The 70th anniversary of the victory of the Chinese people in the War of Resistance against Japanese aggression is celebrated on 3 September in Peking. Not only Tokyo but also Washington and almost all EU governments are going to boycott it. They are sending only second rank representatives to Peking. A ridiculous attempt to erase History, paralleled to those in relation to the victory over Nazism, celebrated in Moscow on 9 May [1].

The historical basis: in the thirties, China was reduced to a colonial state and a quasi colony notably by Japan, Great Britain, the United States, Germany and France. In 1931, Japan transforms the North-East of the country into a puppet- State (Manchukuo). While in 1932 the Japanese army attacks first Shanghai and then other cities, Guomindang di Chiang Kai-shek - who had taken power in 1927 through a bloody coup d’etat and is supported both by the Anglo-Americans and by Hitler and Mussolini, allies of Tokyo – continues to concentrate his attacks against the rural bases of the Red Army, directed by the Communist Party. In 1934, this was forced to a disastrous withdrawal that Mao Tse-tung, after he re-seized power, transforms in one of the biggest political-military undertakings: the “Long March”.

In 1937 Japan unleashed a war of aggression against the whole of China. In July, Japan occupies Peking and Tianjin, Shanghai in November and in December, Nanchinp. Here, Japanese troops carry out a huge massacre, killing more than 300 thousand civilians in the most gruesome manner. [2] The Japanese attack another ten Chinese cities with biological weapons (Bacillus anthracis and Salmonella paratyphi). At this point, through a Communist Party initiative, the Anti-Japanese United Front is born with Kuomintang. In the next eight years of war, the Kuomintang army, armed by the United States, fights from one side against the Japanese invaders, albeit sporadically; from the other side, it submits the areas freed by the Red Army to economic and military blockades, by attacking in several cases, the popular forces, and taking action so that it focuses against this Japanese offensive. Chiang Kai-shek plays on several tables, by ordering a part of its generals to collaborate with the Japanese. 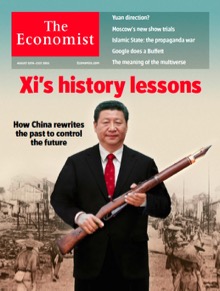 On the basis of a historically incomplete vision, The Economist declares that it was only Kuomingtang that saved China from Japan not the Communists.

From 1937 – 1945 the membership of the Communist Party expanded from 40,000 to 1.2 million. It guides the popular forces into a war that increasingly exhausts the Japanese army, by extending the liberated areas from 1.5 to around 100 million inhabitants.

With its Resistance, that costs more than 35 million deaths, China makes a critical contribution to Japan’s defeat that, beaten in the Pacific by the USA and in Manciuria by the URSS, surrenders in 1945 after the atomic bombings in Hiroshima and Nagasaki. Immediately after, according to a plan determined by Washington, Chiang Kai-shek tries to repeat what he had done in 1927. But his forces armed and supported by the USA, are now faced with the People’s Liberation Army of about a million men and a militia of 2.5 million, emboldened by huge popular support.

Around 8 million soldiers of Kuomintang are going to be killed or captured and Chiang Kai-shek escapes Taiwan under US protection. On 1 October 1949 Mao Tse-tung declares the birth of the People’s Republic of China from Tien An Men Port. In front of which, on 3 September, will march the armed forces of a China that had been fundamentally changed but that, as Russia, the other Brics and tens of countries present in Peking with the highest representatives, indicate its desire to defend its own national sovereignty against the new designs of the imperial domination.