After having observed Donald Trump’s historical references (the constitutional compromise of 1789, the examples of Andrew Jackson and Richard Nixon) and the way in which his partisans perceive his politics, Thierry Meyssan here analyses his anti-imperialist actions. The US President is not interested in taking a step back, but on the contrary, abandoning the interests of the transnational ruling class in order to develop the US national economy. 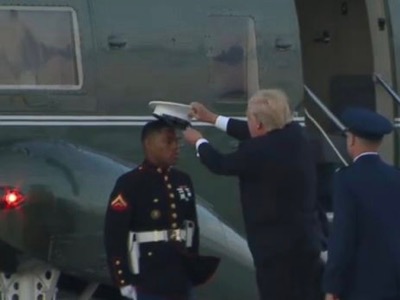 When the backwash from the blades of the Presidential helicopter blew a Marine guard’s cap off, Donald Trump picked it up and put it back on his head.

This article is a continuation of “What is Donald Trump’s position?”, by Thierry Meyssan, Translation Pete Kimberley, Voltaire Network, 19 June 2018.

In 1916, during the First World War, Lenin analysed the reasons which led to the confrontation between the empires of his time. He wrote - Imperialism, the Highest Stage of Capitalism. In this book, he clarified his analysis - « Imperialism is capitalism which has arrived at a stage of its development where domination by monopolies and financial capital has been confirmed, where the export of capital has acquired major importance, where the sharing of the world between international trusts has begun, and where the sharing of all the territories of the globe between the greatest capitalist countries has been achieved ».

The facts confirmed his logic of the concentration of capitalism that he described. In the space of one century, it substituted a new empire for the precedents - « America » (not to be confused with the American continent). By dint of fusions and acquisitions, a few multinational companies gave birth to a global ruling class which gathers every year to congratulate itself, as we watch, in Davos, Switzerland. These people do not serve the interests of the US population, and in fact are not necessarily United States citizens themselves, but use the means of the US Federal State to maximise their profits.

Donald Trump was elected as President of the United States on his promise to return to the earlier state of Capitalism, that of the « American dream, » by free market competition. We can of course claim a priori, as did Lenin, that such a reversal is impossible, but nonetheless, the new President has committed to this direction.

The heart of the imperial Capitalist system is expressed by the doctrine of the Pentagon, formulated by Admiral Arthur Cebrowski - the world is now split in two. On one side, the developed, stable states, and on the other, those states which are not yet integrated into the imperial globalist system and are therefore doomed to instability. The US armed forces are tasked with destroying the state and social structures of the non-integrated regions. Since 2001, they have been patiently destroying the « Greater Middle East », and are now preparing to do the same in the « Caribbean Basin .»

We are obliged to note that the way in which the Pentagon looks at the world is based on the same concepts used by anti-imperialist thinkers like Immanuel Wallerstein, Giovanni Arrighi or Samir Amin.

Donald Trump’s objective thus consists both of reinvesting the transnational capital in the US economy, and turning the Pentagon and the CIA away from their current imperialist functions with National Defense. In order to do so, he has to withdraw from international commercial treaties and dissolve the inter-governmental structures which consolidate the old order.

From the very first days of his mandate, President Trump removed his country from the trans-Pacific partnership agreement, which had not yet been signed. This commercial treaty had been conceived strategically as a means of isolating China.

Since he was unable to cancel the signature of his country on those treaties which were already in force, such as the North American Free Trade Agreement (NAFTA), he began to unravel them by imposing various customs duties which were contrary to the spirit, but not the letter, of the agreement.

Re-framing or dissolving the inter-governmental structures

As we have often written here, the United Nations Organisation is no longer a forum for peace, but an instrument of US imperialism within which a few states continue to resist. This was already the case during the Soviet policy of the empty chair (Korean War) and, since July 2012, it is once again true.

President Trump has directly attacked the two main imperialist tools within the UNO – the peace-keeping operations (which have taken the place of the observation missions which were originally planned by the Charter), and the Human Rights Council (whose sole function is to justify the humanitarian wars waged by NATO). He has deprived the former of their budget, and withdrawn his country from the latter. However, he has just lost the election for Director of the International Organisation for Migration, leaving the road open, for the moment, for the world traffic in human beings. Of course, he has absolutely no wish to destroy the UNO, but only to refocus its activities and bring it back to its original function.

He has just torpedoed the G7. This meeting, initially intended as a moment for the exchange of points of view, had become, as from 1994, a tool for imperial domination. In 2014, it transformed itself into an instrument for anti-Russian activity – thus conforming to what had become the new strategy of the Anglo-Saxon nations, aimed at « cutting our losses », in other words, avoiding a World War by limiting the empire to the borders of Russia and thereby isolating it. President Trump took great care during the meeting in Charleroix to show his confused allies that he was no longer their overlord, and that they would have to make it on their own.

Finally, after having tried to use France to dynamite the European Union, he turned to Italy, where he sent Steve Bannon to create an anti-system government with the help of US banks. Rome has already concluded an alliance with five other capitals against Brussels.

Via diverse fiscal and customs measures, rarely voted by Congress and usually adopted by decree, President Trump encouraged the major companies of his country to repatriate their factories back to the USA. There immediately followed an economic recovery, which is about the only thing for which the Press will recognise him.

However, we are a long way from noting a financial decline. World finance is probably continuing to prosper outside of the USA, or in other words, continuing to suck up the wealth of the rest of the world.

Reorienting the Pentagon and the CIA

This is obviously the most difficult operation. During his election, President Trump could count on the the votes from his troops, but not those of the superior officers and generals

Donald Trump entered into politics on 11 September 2001. He immediately contested the official version of the events. Thereafter, he expressed his astonishment about the contradictions of the mainstream story – while Presidents Bush Jr. and Obama declared that they wanted to eliminate the jihadist movements, we observed on the contrary a drastic multiplication and globalisation of jihadism during their mandates which went as far as the creation of an independent state in Iraq and Syria.

This is why, as soon as he took office, President Trump surrounded himself with officers who enjoyed a recognised authority in the army. It was, for him, the only option, both to guard against a military coup d’etat and to ensure that he would be obeyed in the reforms that he wanted to implement. Then he gave carte blanche to all the military for everything concerning tactics on the ground. Finally, he never lost an opportunity to confirm his support for the armed forces and the Intelligence services.

After having confiscated their permanent chair at the National Security Council from the president of the chiefs of staff and the director of the CIA, he gave the order to cease support for the jihadists. Progressively, we saw Al-Qaeda and Daesh lose ground. This policy continues today with the withdrawal of US support for the jihadists in Southern Syria. From now on, they no longer form private armies, but only scattered groups which are used for occasional terrorist actions.

Similarly, he first of all pretended to give up dissolving NATO if it would agree to add an anti-terrorist function to its anti-Russian function. He is now beginning to show NATO that it does not enjoy eternal privileges, as we we saw with his refusal to deliver a special visa for an ex-General Secretary. Above all, he has begun to diminish its anti-Russian function. So he is now negotiating with Moscow the cancellation of Alliance manoeuvres in Eastern Europe. Besides this, he is now taking administrative actions which attest to the refusal of the allies to contribute to collective defence as far as they are able. In this way, he is preparing to dismantle NATO as soon as he sees fit.

This moment will only come when the destructuration of international relations occurs simultaneously at maturity in Asia (North Korea), the Greater Middle East (Palestine and Iran) and in Europe (UE).

President Trump is absolutely not the « unpredictable » character so often described. Quite the contrary, he acts in a clearly thoughtful and logical manner.

Donald Trump is preparing a reorganisation of international relations. This change will operate through a complete and sudden upheaval directed against the interests of the transnational ruling class.