MiG-31: the vehicle for the “burevestnik”, the cruise missile of nuclear propulsion?

According to US intelligence sources, the Russian tests on cruise missiles of nuclear propulsion have failed. However, the US’s ambassador to Nato has suddenly declared that the US would destroy the missiles that Russia constructed in breach of the treaty on intermediate range nuclear weapons. Explanations: 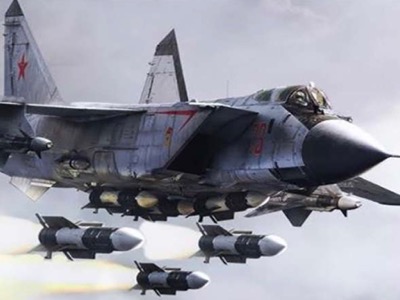 A country that has cruise missiles with nuclear propulsion can put pressure on States that are seeking to invade it. Such a drone can patrol above populated areas of an enemy state for days, without the AA defense of the enemy state seeking to bring it down. There is a rational basis for the enemy’s action: bringing down the drone could lead to only one result: a nuclear catastrophe on its territory.

The Berlin Air Show (the Air Force’s exhibition) took place in April 2018. France and Germany announced that Airbus (the company that builds the Eurofighter that weaponize the German Airforce’s army) and Dassault Aviation (manufacturer of Rafale airplanes which equips the French Air Force’s army) have commenced to conceive a new fifth generation fighter plane. Because of Brexit, the United Kingdom has not been co-opted into the plan. In July 2018, the US company Lockheed Martin has made a F-35 bearing the number 300 carry out a flight. On 2 July 2018, Yuri Borisov, Russia Federation’s Vice Minister of Defence declared that the Russian plane Su-57 was not a priority and that only 12 of them had been ordered by the Russian Army. Consequently, the mass manufacture of this plane has been slowed down. In this context, the question is posed: what equipment is a priority for the Russian Air Force?

At the beginning of 2018, one priority of the Russian army was to modernize 10 supersonic planes with long-range action. So MiG-31 BM, was transformed into MiG-31 BP to launch Kh-47M2 Kinzhal, the anti-ship missiles. This type of missile has a range of 2,000 km, and its mission is to strike airplane carriers and helicopter carriers. However, the US ABM shield in Romania, Poland, South Korea and Alaska are for sure targets for the Kh-47M2 Kinzhal missile (see the photo below). In 2017, Tarasenko, director of the company MiG, declared to Sputnik that they were planning to replace the MiG-3 with the new 5th generation MiG-41 plane, capable of flying at Mach 4.3. 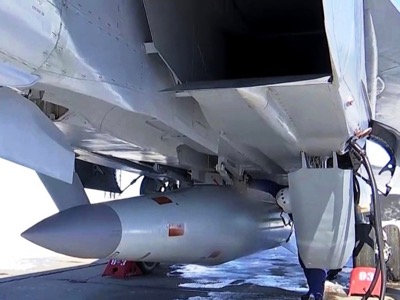 Why has modernizing a plane that has not been manufactured since 1994 suddenly become a priority? The MiG-31 BM was conceived to intercept the early warning planes (AWACS), armed with R-37 missiles (with a wider range: 384 km). Following this, the plane was adapted to intercept the cruise missiles flying at low altitude. The radar on board the MiG-31 BM contains the topography of the terrain flown over in the memory of the digital card of the microprocessor. This permits comparing and distinguishing the presence of cruise missiles. The MiG-31 is limited, because it is not a multi-role plane, capable of performing air combat moves; it is a plane for two (pilot and operator of arms) capable of patrolling at a high altitude for two hours.

The Mig-31 weighs 46 tonnes on take off, has an internal tank of motor fuel, a capacity of 12.8 t, a maximum speed of Mach 2.83 (3,000 km / h), and is capable of flying at an altitude of 20.6 Km. The plane is coated in alloys containing titanium resistant to kinetic heat generated by the high speed flight. MIG-31 BM has a retractable system of refuelling in flight, in the fuselage. During a drill carried out in the summer of 2016, a MiG-31 BM flew for seven hours, from Krasnoïarsk to Astrakhan, covering a distance of 8,000 km with three refuellings in flight. The Mig-31 BM is the ideal platform to increase the range of the air-ground missiles. This is due to the initial speed and the low density of the air at the altitude at which the launch takes place.

It took everyone by surprise when on 2 October 2018, the US ambassador to NATO, Bailey Hutchison Kay, invited Russia to stop its cruise missile programme on the grounds that it violated the Treaty on Intermediate Range Missiles (INF), failing which the United States and their allies would intervene with the use of force. At the same time that this declaration was made, the Western media published photos of a MiG-31 BM, registered as “81 Blue”, carrying under its fuselage a new type of missile, of which we know nothing (see photo below). The air force has been photographed at the Joukovski airbase and is conceived to test again types of arms, and does not have a system for hanging arms under the wings, as in the configuration of the MiG-31 BP. 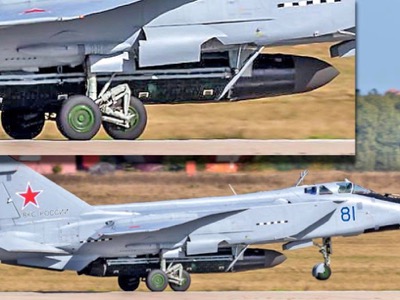 With regard to the new missile carried by the MiG-31, even if it is a nuclear missile of intermediate range IRBM (3 000 to 5 500 km), it is outside the reach of the INF treaty. The scope of this treaty is limited to missiles based on the ground. Due to the MIG-31’s elevated initial speed and altitude, a nuclear missile with a field of action comparable to that of an intermediate range missile (8 000 km) must not have a mass greater than 7 – 9 tonnes. By way of comparison, an IRBM launched from the ground, weighs more than 25 tonnes.

There were speculations that the mysterious missile would be a modernized version of Kontakt 79M6, the anti-satellite missile in three stages, that can reach an altitude of 600 km. The missile also has the capabilities to intercept ballistic missile in the cruise phase. From 1987, Kontakt has been tested on two modified MiG-31 D (one of which is registered “072 Blue”). The Kontakt is 7.25 m long, weighs 7 tonnes, and was launched from a height of 15 to 18 km, from a Mig-31 D flying at a speed of 2 120 to 2 230 km / h. But after the collapse of the URSS, the programme was abandoned, and the planes and missiles that formed part of it have joined a museum. 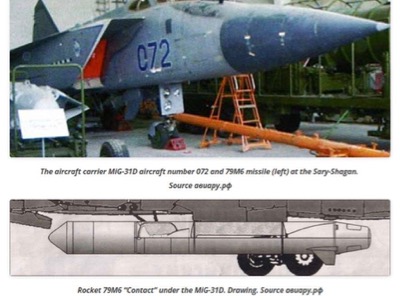 Thus the MiG-31 BM registered “81 Blue” could carry any type of missile including anti satellite missiles.

On 1 March 2018, President Vladamir Putin delivered a speech announcing that Russia had tested the Burevestnik cruise missile 9M729 / 9M730. This cruise missile has nuclear propulsion[1], and as such, is not restricted in either its ability to manoeuvre or its range. This missile has a range that would be at least ten times greater than that of the US Cruise Missile, the Tomohawk. This would allow Russia to by-pass the AA defense zones and to strike any target in the world. The US would be totally defenceless against this type of weapon because at present, the US lacks a counter force and does not have a plan to conceive this type of cruise missile in the near future” 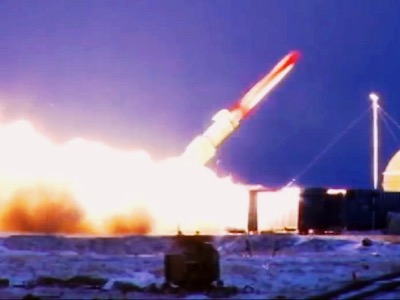 The Burevestnik tests probably took place at the Nenoksa polygon in the region of Arkhangelsk. The 9М730 missile with a motor with solid combustibles, is launched from a ramp. Its motor starts propelling during flight. In theory, the nuclear motor is simple: it does not include any pieces that are moving and does not need massive reserves of fuels. The air penetrates the inlet of the cruise missile, reaches a nuclear reactor and is heated to a temperature of about 1 400 - 1600°C. It is then released through the buzzard and propels the vehicle.

However, the advantages of using this type of missile are downplayed by the risks that they can pose. The two main risks are: the possibility of a fissure occurring in flight and the reactor losing its isolation. As a consequence, during the test flights, the cruise missile was accompanied by two cargo planes (Il-76). These planes were put up by the company Rosatom and converted into laboratories equipped with material to detect radiation, and equipment to find the range of the trajectory of the missile (SKIP) functioning by satellite channels of communication. The plane was Il-976. 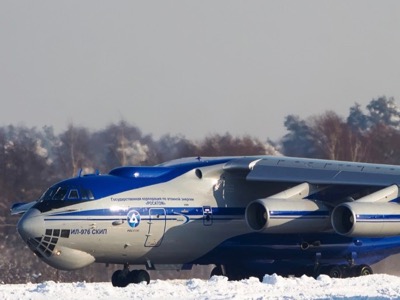 Citing anonymous sources from the Pentagon, the TV news channels Fox News and CNBC have declared that US intelligence had followed four Russian tests on cruise missiles with nuclear propulsion, carried out between November 2017 and February 2018. Every test ended up crashing in the Arctic.

There is a disconnect between the declarations made on the television stations by sources of US Intelligence and the order issued in the form of a request that Kay Bailey Hutchinson extended to Russia. It is only if Russia had succeeded in its tests on the Burevestnik missile that the US ambassador to NATO would communicate that the United States will do everything in its power to prevent this programme from developing any further. On the other hand, if the results of the Burevestnik tests had not been positive, what interest does Russia have in adapting it to the MiG-31 BM? For the mysterious rocket carried by the MiG-31 BM does not resemble the Kinzhal; the profile of its nose is not made for flights at hypersonic speed but rather for flights at subsonic speed like all the cruise missiles. At the extreme opposite, we can clearly distinguish the buzzard of a motor with solid combustible used in acceleration, immediately after separation with MiG-31 BM. 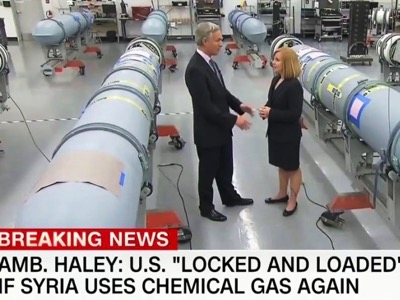