The criteria that we habitually use in politics to explain power games do not apply to Algeria. Its current leaders are above all impostors who have fabricated, one by one, false biographies in order to obtain the consideration of their compatriots. Inch by inch, they have clawed their way to the highest summit of the State. They hold their positions there by the will of the great powers who pretend to believe their fables in order the better to manipulate them. 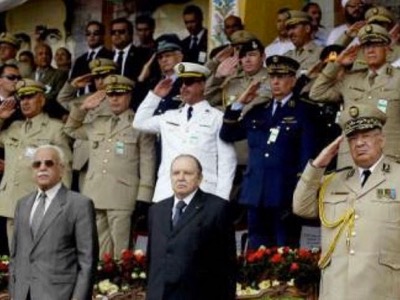 Over about twenty years, the majority of the biographies of the Algerian leaders have been falsified. They all claim to have fought for national liberation against the French occupation, but those who actually did so are few and far between. The real heroes were pushed aside a long time ago.

The international medias are discovering with astonishment the reality of the Algerian Power that, until now, they have worked to hide. This Power is not the prize of a single clan, but that of several men of whom the figure of President Bouteflika is the central balancing point.

In Algerian Power, who defends what?

These clans continue to wage a ferocious battle against one another, which has prevented them from nominating not only a successor to the outgoing President, but also a Prime Minister. Finally, they have nominated three - Noureddine Bedoui, assisted by Ramtane Lamamra, both flanked by a third, Lakhdar Brahimi.

Let’s be clear about the distribution of roles :

Abdelaziz Bouteflika is a small-time crook who was the secretary of Houari Boumediene, and he was able, over time, to invent a past for himself [1]. For about twenty years, he has usurped the Presidential function, thanks to a series of violations of the Constitution and glaringly obvious rigged elections. Hospitalised in Switzerland for two weeks for certain « periodic medical check-ups », he was diagnosed with « neurological and respiratory problems ». Noting that he was incapable of giving his assent for care procedures, the doctors asked for the name of his legal tutor in order to authorise them. The only response they received was the repatriation of the bedridden dying invalid without his being seen. Then An Nahar TV broadcast some fleeting images of him dating from 18 October 2017, but which were presented as having been taken on 11 March 2019 [2]. Finally, a new letter attributed to Bouteflika was published to announce the sine die extension of his mandate.

Noureddine Bedoui was nominated as Prime Minister by the person holding the Presidential pen. Until then, he had been the Minister of the Interior, and was reputed to be close to the outgoing President’s brother, Nacer Bouteflika. It was he who had imagined the possibility of attributing a fifth mandate to the invalid President and had allegedly collected six million signatures to support him. His role is to ensure the Presidential illusion.

Ramtane Lamamra was nominated as assistant Prime Minister. Until then, he had been advisor to the invalid President, in other words, one of the holders of his President’s place in the Power structure. He is considered to represent the interests of the ex-colonial power, France.

Lakhdar Brahimi was nominated as President of the National Conference tasked with setting up the democratic transition which has often been announced but never initiated. This 85 year-old retiree was recalled because of his service record – he played a central part in the creation of the current system, and represents the interests of the new colonial power, the United States.

This centre-stage personality is in no way what he pretends to be. Born of a family which collaborated with the French occupier, he has managed to make believe that he had, on the contrary, participated in the struggle for national liberation.
• In 1965, he was the last person to receive Mehdi Ben Barka. He informed the Moroccan secret services of his intentions and therefore facilitated the kidnapping and assassination of the secretary of the Tricontinental.
• In 1982, in the context of the efforts by Algeria, Morocco, and Saudi Arabia, he concluded the Taëf Agreement, which put an end to the Lebanese civil war in exchange for the creation of a confessional régime which was totally ungovernable, placing de facto the country under the eternal control of the main regional and international powers.
• At the end of 1991, he was one of the ten members of the High Security Council of Algeria which destituted President Chadli Bendjedid, annulled the municipal elections, and opened the way for Abdelaziz Bouteflika to approach power [3].
• In 2000, he pushed for the creation of an Intelligence Service within the administration of the United Nations [4].
• In 2001, at the demand of Washington, he concluded the Bonn Agreements which ended the US / British intervention in Afghanistan and placed Hamid Karzai and the narco-trafickers in power [5]. _ • In 2012, after the resignation of Kofi Annan from his position as mediator for Syria, he was jointly nominated by the UNO and the Arab League, not as mediator, but « special representative ». Far from implementing the Lavrov-Annan peace plan which had been approved by the Security Council, he worked to apply the secret plan of his boss, UN number two Jeffrey Feltman, for a total and unconditional surrender of the Syrian Arab Republic [6].

The role of the Islamists

There are several stories concerning the black decade (1991-2002) during which between 60,000 and 150,000 people lost their lives. The only thing that is certain, when we look at that extended period, is that Wahhabite social projects replaced the State in the countryside, that Islamist terrorism was a British tentative to exclude the French influence, and that the army saved the country while certain military personnel passed over to the side of the Islamist « throat-slashers ».

When it was all over, in 2004, President Bouteflika allied himself personally with the Islamist « throat-slashers » [7]) against the (military) « eradicators » . He presented himself as an old soldier capable of making peace with his enemies. In reality, he allied himself with the Islamists in order to reduce the power of the army and the security services which had placed him power.

In 2013, Abdelaziz Bouteflika restructured the Department of Intelligence and Security, deprived them of much of their attributions and means, and retired General Mohamed Mediene.

In 2014, he authorised the armed branch of the Islamic Salvation Front (ISF), the Armed Islamic Group (GIA - responsible for tens of thousands of deaths) to organise a training camp in the face of the whole world.

In 2016, he ordered Ahmed Ouyahia (whom he later named as Prime Minister) to receive the head of the GIA, Madani Mezrag, and made it known that he now had enjoyed amnesty and legal immunity.

In March 2019, his clan brought Madani Mezrag back to the front of the stage in order to incarnate the menace of a new civil war on the demonstrating population.

In this context, the nomination of Lakhdar Brahimi makes perfect sense. When he was tasked with the Syrian dossier at the UNO and the Arab League, he fought for a « political solution » which included the arrest of President Bachar el-Assad and his replacement by a professor from the Sorbonne, Burhan Ghalioun. This man was a collaborator with the National Endowment for Democracy (NED/CIA), even though, officially, he was a partisan of a non-confessional Syria, and had been the speech-writer for Abbassi Madani, the head of the IFS during his exile in Qatar.

Independent Algeria was first of all built in the secrecy inherent to the struggle for national liberation. Then this secrecy was maintained and used by some to construct a legend and which could offer them a glorious role. This mystification, repeated over the decades, deprived the people of the understanding of events. It allowed them to make themselves indispensable by playing danger (the « throat-slashers ») off against protection (the « eradicators »). Prisoners of their own mystification, they are now obliged to submit to the blackmail of France and the United States.

[7] We make a distinction between the Muslim religion and its political manipulation, Islamism, as formulated by the Muslim Brotherhood. Editor’s note.

The Brahimi Plan
"Before our very eyes"