Just like the Atlantic Alliance, the NATO Summit of 4 December will be a staged event during which the vassals will sign up for even greater expenditure imposed by their overlord. No-one knows what the Pentagon has prepared, but they will all have to approve it. 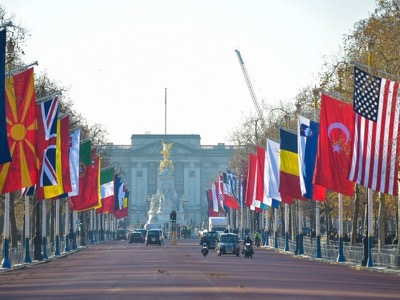 On 4 December, the North Atlantic Council of heads of State and government met in London to celebrate the 70th anniversary of NATO, defined by Secretary General Jens Stoltenberg as “the most successful alliance in History”.

An undeniable “success”. Since it demolished the Yugoslav Federation in 1999 by acts of war, NATO membership has risen from 16 to 29 countries (30 if it now covers Macedonia), and expanded Eastward to the borders of Russia. “For the first time in History - claims Stoltenberg- we now have combat-ready troops in the Eastern wing of our Alliance”. But the North Atlantic Treaty Organisation has gone beyond that, by extending its war-making operations as far as the Afghan mountains and across the deserts of Africa and the Middle East.

Currently, the Great Alliance is setting the bar even higher. At the London Summit - pre-announced Stoltenberg - the leaders of the 29 member countries “will recognise that space is our fifth field of operations”, to be added to the land, maritime, aerial and cyber-spatial fields. “Space is essential for the success of our operations”, emphasised the Secretary General, hinting that NATO intends to develop a space-based military programme. He obviously gave no details, but said that NATO has signed a first contract of one billion dollars to modernise its 14 AWAC aircraft. These are not simple radar planes, but flying command centres, built by the US company Boeing to manage battles via spatial systems.

Without any doubt, almost none of the European leaders (for Italy, Prime Minister Conte), who, on 4 December “will recognise that space is our fifth field of operations”, knows nothing of NATO’s spatial military programme, prepared by the Pentagon and by the European military summits tied to the largest aero-spatial industries. And even less of these programmes is known by European parliaments which, as in Italy, accept all of NATO’s decisions – under US command – without a thought for their politico-military and economic implications.

So NATO is going to launch into space in the wake of the new Space Command created by the Pentagon last August with the goal, as declared by President Trump, of “ensuring that American domination of space will never be threatened”. Trump then announced the successive constitution of the US Space Force, with the mission of “defending vital American interests in space, the next field of war combat”. Russia and China accused the USA of opening the way to the militarisation of space, and warned that they have the capacity of responding. All this maximises the threat of nuclear war.

Even if we do not yet know NATO’s spatial military programme, one thing is certain – it will be very expensive. At the Summit, Trump will exert pressure on the European allies in an attempt to force them to expand their military spending to 2% or more of their GDP. So far, 8 countries have done so - Bulgaria (which raised its contribution to 3.25%, just below the USA’s 3.42%), Greece, the United Kingdom, Estonia, Romania, Lithuania, Latvia and Poland. The others, while remaining below 2%, have agreed to the increase. Dragged along by the enormous USA expenditure - 730 billion dollars in 2019, more than ten times that of Russia – NATO’s annual military budget, according to official data, has risen to beyond 1,000 billion dollars. In reality, it is higher than that indicated by NATO, because it does not include various posts of a military character – for example that of US military weapons, which is listed not to the Pentagon but to the Department of Energy.

Italy’s military spending, which has risen from 13th to 11th place in the world, has now in real terms reached approximately 25 billion Euros annually. Last June, the Conte government added 7.2 billion Euros, supplied by the Ministry for Economic Development, for the purchase of weapons systems. In October, during a meeting with NATO’s Secretary General, the Conte II government agreed to increase this sum durably by about 7 billion Euros as from 2020. (La Stampa, 11 October 2019).

At the London Summit, more billions of Euros of public finances will be required from Italy in order to sponsor NATO’s operations in space, while we can not find the money for our own security and rebuild collapsed viaducts.