No one stops the Pentagon. While the military deployment project around China mentioned by Hillary Clinton in 2011 had officially been abandoned, NATO had just had it endorsed by the London Summit. The process has been launched and is expected to start with Australia’s accession in 2026. 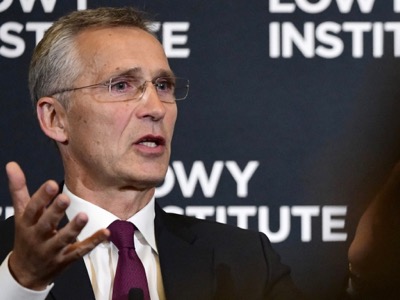 NATO Secretary General Jens Stoltenberg addressed the Lowy Institute in Sydney on August 7, 2019. He stated that it is not NATO that wants to deploy in the Pacific, but China that threatens the Allies there.

The international press only remembered the bursts of voices that preceded it and the giggles that punctuated it at the NATO 70th Anniversary Summit in London. The important thing was obviously elsewhere [1].

When it was created, the function of the Atlantic Alliance was summarized by its Secretary General, Lord Hastings Lionel Ismay, as "Keeping the Soviet Union out, the Americans in, and the Germans down" [2]. As this objective had disappeared with the "homeland of communism", efforts were made to present the Russian Federation as its continuation. Then we accepted the idea of allowing Germany to have its own policy. Finally, consideration was given to extending the Alliance to the Pacific to "contain" China, which has just been confirmed.

The current insults give a bad image of the Alliance, but they correspond to the return of the secular Franco-German rivalry. France intends to become a very great power, both through its atomic bomb and through the European supranational state, while Germany cannot consider becoming a military power again without NATO’s nuclear protection [3].

This situation is expressed in Syria and the Sahel. On Syria, France curses over the Turkish attack on Kurdish PKK/YPG mercenaries, while Germany proposes to deploy its troops under NATO control. Neither of them managed to move forward, with the United States remaining the sole masters of the game. In the Sahel, France is beginning to find the burden of maintaining the status quo too heavy for it, while Germany would be ready to increase its share, but exclusively under US command. Here again, neither of the two states is able to move forward. Everyone has understood what is at stake behind the anti-terrorist rhetoric: the maintenance of the current governments that allow the exploitation of the region’s resources. However, here again, the United States is the sole master of the game and intends to be the first to benefit from this exploitation.

What is new is the possible opening of the Chinese front. It would involve transforming the Atlantic Alliance into an "Atlantic-Pacific Alliance". According to the Pentagon’s studies, Australia, India and Japan should therefore be brought on board in such a way as to surround China as we have done with Russia. This process, which should take a decade, has just begun with the London Summit.

Already, US PaCom, the United States Pacific Command, has been renamed by Secretary of Defense Jim Mattis US IndoPaCom [4].

Then the new Secretary of Defense Mark Esper, Secretary of State Mike Pompeo and Alliance Secretary General Jens Stoltenberg quietly went to Sydney in early August to test Australian leaders who were honoured but frightened by the prospect of having to shelter nuclear missiles [5]. Contacts were made identically with India and Japan, but they were much less fruitful. In addition, the United States has reviewed its policy towards South Korea, Indonesia, Myanmar, the Philippines, Thailand and Vietnam to bring their respective armies closer together. These states are used to working with Pentagon staff, but not at all with each other.

Beijing had understood by 2014 that the US willingness to leave the Intermediate-Range Nuclear Forces Treaty was less an anti-Russian perspective than a threat to it. It is now clear that there will be a deployment of US nuclear missiles all around China and that NATO will follow.

For the Chinese, it is a step backwards, when at the end of the 19th century the United States developed its "Open Door Doctrine". The aim was to establish a pact between the colonial empires so that they could establish a form of free commercial competition between them and exploit underdeveloped regions instead of waging war against each other to appropriate territory. Given its industrial superiority, Washington was sure to win. To continue this aggression, it developed a soothing speech. It supported the "territorial integrity and sovereignty" of the countries where it wished to do business. It promoted the strengthening of local governments as only they could guarantee the application of unequal treaties. In this way, the peoples controlled themselves for its benefit. The false nature of the US policy statements was verified during the Japanese attacks on China: Washington supported all Japanese demands and left eastern China to be dismembered.

It was precisely this experience of fighting all the colonial empires united against it - including tsarist Russia - that pushed President Xi Jinping to get closer to his Russian counterpart, Vladimir Putin, because his country experienced the same aggression afterwards: both states know in their blood that they will have to face them one day or another. However, the Pentagon has bet that once the danger comes, Moscow will not support Beijing; a risk assessment prior to the Russian hypersonic missiles.

China does not see this war in the same terms as NATO: it intends to move the battlefield into the computer sphere and destroy the weapons of the Enlarged North Atlantic Alliance by cyber attacks before it uses them.

In October 2011, Secretary of State Hillary Clinton called in Foreign Policy for a "pivot to Asia": the United States had to leave Europe and the broader Middle East to deploy in the Far East [6]. National Security Advisor Tom Donilon explained this plan in March 2013 to the Asia Society [7]. It included a diplomatic and financial mechanism, the draft Trans-Pacific Partnership Agreement. However, very quickly the Pentagon corrected the situation: it would not be a question of abandoning one part of the world for another, but of extending from one to the other. This was the notion of "rebalancing", the only one compatible with the pursuit of "war without end" in the wider Middle East. Failing to convince, the Pentagon abruptly ended the debate by stressing that it was impossible from a budgetary point of view to maintain three fronts at the same time [8]. Since then, the Pentagon has acquired many weapons that it has stored in the Pacific.

President Donald Trump tried to stop this mirage by removing the United States from the Trans-Pacific Partnership Agreement as soon as it joined the White House. But nothing doing. The Pentagon is inexorably continuing its march and has just imposed its vision after nine years of talk.

While from the French point of view, NATO is in a state of "brain death", the Pentagon has begun its transformation into a global organization. All Member States signed the London Declaration without reflection, which states: "We are aware that China’s growing influence and international policies present both opportunities and challenges, to which we must respond together as an Alliance" [9]. The process is underway.

[4] “US PaCom is now the US IndoPaCom”, Translation Anoosha Boralessa, Voltaire Network, 11 June 2018.