The "Xinjiang papers", released on 16 November 2019 by the New York Times, have been spinned by the Western media as a plan to suppress Uyghur culture in China [1]. Written in Chinese, their interpretation may not be easily accessible to the Western world. In reality, China protects Uyghur culture, tolerates Muslim religion, while trying to stymie terrorist attacks and the separatist push coming from the World Uyghur Congress (WUC).

The documents published by the New York Times attest to the determination of the Chinese government to use any means necessary to maintain civil peace. President Xi has called on the police to show "absolutely no mercy" towards terrorists. Indeed, the Chinese leader is up against a powerful organization, i.e. the World Uyghur Congress, which was created by the CIA during the Cold War, and which the US daily disingeniously portrays as being totally peaceful.

However, the World Uyghur Congress, based in Munich (Germany), has directly claimed responsibility for many deadly attacks in China. In addition, thousands of Uyghur combatants were sent to be trained in Syria with Turkey’s assistance. [3] More than 18,000 Uyghur jihadists are currently occupying the city of al-Zanbaki (Idlib governorate) where German and French NGOs provide them with food and health services.

Uyghur jihadists have garnered many supporters in Europe. Thus, lobbyists gathered in Brussels behind closed doors for a three-day seminar (7-9 December 2019), followed on 10 December by a conference in the European Parliament co-chaired by French MEP, Raphaël Glucksmann, and WUC president Dolkun Isa. 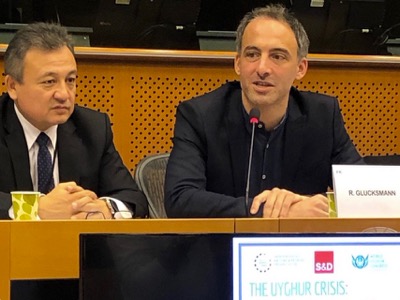