The new European Commission has clearly stated its project in the era of US withdrawal: to restore Western Europe’s dominance over the rest of the world from the 16th to the 19th century. To achieve this, it is adopting a trumped-up ideology that uses the vocabulary of its philosophers in the wrong way. This posture would be laughable if it could not lead to war. 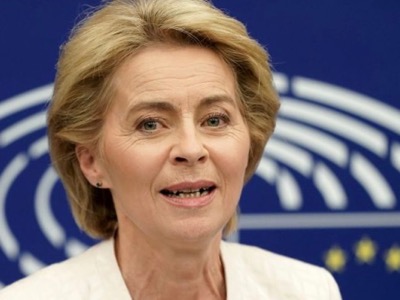 The former German Defence Minister, Ursula von der Leyen, took up her post as President of the European Commission in the place reserved for Spitzenkandidate Manfred Weber. Until then, this role had been held by a representative of Atlanticist interests.

The European Union aims to restore to its members the status they had acquired by force in their respective empires. As the world has changed, it is no longer possible to base colonial reality on the educational abyss that separated the savages from civilization. A new ideology must therefore be formulated which dresses European domination with noble ideals.

This already exists in embryonic form and was used by the United States to justify its own leadership. It needs to be made more coherent and clearer.

Its basic slogan states that "universalism" should no longer be understood as the equality of all before the law, regardless of origin, wealth and religion, but as the equal treatment that everyone can enjoy in whatever country they travel to. From this point of view, the real enemy is no longer the disorder and insecurity that it engenders, but the States that are supposed to protect us and abusively create differences between us according to our nationalities; excellent doctrine for a supranational State! (the US federal state, then the European federal state).

At the economic level, it militates for the free circulation of capital (which cannot be hindered by States) and the globalisation of trade (because it binds people through trade).

On the military level, it supports the interference of the "international community" in "non-globalized states" (because they are resistant to the New Order) and the use of non-state armed forces (because some states must disappear).

At the political level, it supports any global cause such as the fight against human responsibility for global warming. Ultimately, it rejects International Law (i.e., agreed upon by nations) in order to replace it with Global Law (i.e., binding on all) [1].

If the issue of migration has become taboo for the European elites after the failure of Chancellor Merkel in 2015, all other points are commonly accepted.

Gender confusion, part of the gender parity and which continues today with the development of a transgender model. No one dares to observe any longer that parity in the Parliamentary Assemblies and Boards of Directors has not benefited the working classes at all, but only the elites. It is not clear why the shift from the integration of transsexuals to an apology for gender uncertainty will advance anything.

The free movement of capital is one of the "Four Freedoms" established since the Single European Act (1986). It allows large companies to avoid national taxes, which is why everyone deplores it, but no one wants to abolish it. The globalisation of trade has destroyed millions of jobs in Europe and has begun to erode the middle classes [2].

Military interference in non-globalized states is at the heart of the Rumsfeld/Cebrowski doctrine adopted by the United States in 2001. It is astounding that Western elites still seem to ignore it. For example, the release of a wide-ranging survey on the 18-year "failure" of the United States to pacify Afghanistan has generated a great deal of comment. But absolutely no one has dared to say that far from being a failure, it was the mission assigned in 2001 to the Pentagon by Secretary of Defense Donald Rumsfeld; 18 years that the "Endless War" has been going on in more and more theatres of operation [3].
The use of non-state military forces has peaked with jihadist organizations. One of them -Daesh- even went so far as to take over a non-recognized state. It continues today with the official support of the European Union to a terrorist organization, the PKK, provided that it operates in Syria and not in Turkey [4].

The fight against the human cause of global warming is first and foremost a policy aimed at regenerating the automotive industry at the end of the cycle: switching from petrol engines to electric motors. The fact that Milutin’s theory Milanković (position of the Earth in relation to the Sun) is sufficient to explain the current changes does not prevent the claim that it has been "scientifically proven" that they are due to human industry [5].

The worst is to come with the invention of a Global Law.

Ignoring the different legal traditions in the world, the European Union subsidizes the International Criminal Court. After having long been a tool of European colonialism in Africa, the Court intends to assert the superiority of Europeans over all other human beings.

After having unsuccessfully attempted to try Nobel Peace Prize winner Aung San Suu Kyi for crimes against humanity, the Court hopes to try Syrian President Bashar al-Assad for resisting the Muslim Brotherhood and Israel for its crimes in the Palestinian Territories. Since Europeans have no particular concern for the Rohingas, the Syrians or the Palestinians, how can we fail to observe that the Union is taking the opposite tack from the United States and trying to assert itself as the defender of the Muslims, even if it means selling off its tradition of secularity? [6]

The High Representative of the Union for Foreign Affairs and Security Policy, Josep Borrell, announced the forthcoming creation of a comprehensive sanctions regime against human rights violations, as called for by the European Parliament last April (B8-0181/2019). Inspired by the US model of the Global Magnitski Act [7], the European Union will, like a teacher, teach Good and Evil and award good and bad points to everyone.

The meaning of the words changes. From the sixteenth to the eighteenth century, universalism enjoined to fight against colonialism. In the 19th and 20th centuries, it dictated "the duty of the white man" and authorized the mandates of "developed" countries to help the "underdeveloped". In the 21st century, it became the justification for neo-colonialism.

President Ursula van des Leyen summed up her programme for the restoration of European domination with these words: The time has come, "We must use Force".

[5] “Peace or the Fight Against CO2: You Have to Choose your Priority”, by Thierry Meyssan, Translation Roger Lagassé, Voltaire Network, 30 October 2019.

[7] “What is left unsaid in the Anglo-Saxon accusations against Russia”, by Thierry Meyssan, Translation Pete Kimberley, Voltaire Network, 24 July 2018.

Source : “For the European Union, the time has come to use force”, by Thierry Meyssan, Translation Roger Lagassé, Voltaire Network, 31 December 2019, www.voltairenet.org/article208739.html

Source : “For the European Union, the time has come to use force”, by Thierry Meyssan, Translation Roger Lagassé, Voltaire Network, 31 December 2019, www.voltairenet.org/article208739.html