We only know what is happening in the Levant through the war propaganda of the country in which we live. We ignore other points of view and, more importantly, how our armies have behaved. To disentangle the true from the false, historians will have to examine the available documents. However, what the Western military literature tells us contradicts the statements of politicians and the narrative in the newspapers. It is only by becoming aware of the existence of the Pentagon’s strategy since 2001 that we will be able to understand what really happened and why such contradictions are occurring today. 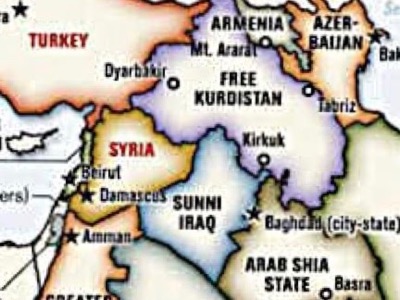 The remodeling of the Levant according to the Pentagon headquarters in the Levant. This map was described by Colonel Ralph Peters in an article on September 13, 2001, but he did not publish it until 2006.

We do not understand what is happening in northern Syria because we believe a priori that there was a fight between the evil Daesh jihadists and the kind Kurds of the PKK/YPG. That is absolutely not true. This struggle existed only to limit their respective territories or out of ethnic solidarity, never for ideological or religious reasons.

On the other hand, we do not see the role played by Donald Trump. As the press spends its time insulting the President-elect of the United States, it cannot be counted on to analyze and understand its policy in the broader Middle East. However, it has a clear guideline: the end of the Rumsfeld/Cebrowski doctrine, a legacy of 9/11. In doing so, he opposes his generals - all trained under the Bush Jr and Obama mandates to govern the world - and the Western European political class.

To understand what is happening, we must take the facts upstream and not downstream. Let us return to the plan drawn up by the Pentagon at the beginning of the Bush administration in 2001 and revealed, two days after the attacks of September 11, by Colonel Ralph Peters in Parameters [1], the review of the US Army: the "remodelling" of the world, starting with the broader Middle East. This plan was confirmed a month later by Secretary of Defense Donald Rumsfeld, who appointed its main designer, Admiral Arthur Cebrowski, Director of the Force Transformation Office. It was explained by his assistant, Thomas Barnett, in 2005 in The Pentagon’s New Map [2]. And illustrated by the same Ralph Peters when he published the map in the Armed Forces Journal in 2006 for the first episode: what the broader Middle East was to become [3]. Given the difficulties encountered in the field, it was the subject of an amendment published by a Pentagon researcher, Robin Wright, in the Sunday supplement of the New York Times [4] in 2013.

According to these documents, five States were to be dismembered into fourteen entities: Syria and Iraq, Yemen, Libya and Saudi Arabia. 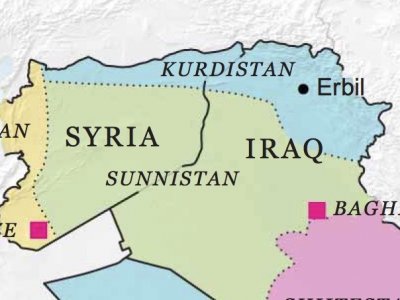 Map published by Robin Wright in 2013, one year before Daesh’s transformation and before that of the PKK/YPG.

With regard to Syria and Iraq, these two States were to be divided into four. The map published in 2013 outlines a "Sunnistan" and a "Kurdistan", both straddling the two current states. The following year, the first was created by Daesh, the second by the YPG. At the time this map was published, Daesh was just one of hundreds of tiny anti-Syrian terrorist organizations; while the PYG was a pro-government militia whose fighters’ salaries were paid by the Syrian Arab Republic. There was nothing on the ground to predict the creation of the Caliphate and Rojava wanted by the Pentagon.

The Turkish Kurdish daily Özgür Gündem [5] published the decision statement of the meeting during which the CIA prepared the way Daesh would invade Iraq from Raqqa. This document indicates that Masrour "Jomaaa" Barzani, then Head of Intelligence of the Iraqi Kurdistan Regional Government, attended this planning meeting on 1 June 2014 in Amman, Jordan. He became Prime Minister of the Iraqi Kurdistan Regional Government last July.

It is important to note that, according to Robin Wright’s map, US "Kurdistan" should include northeastern Syria (like French "Kurdistan" of 1936) and the Kurdish region of Iraq (which the French had not considered).

The support of the Iraqi Kurdistan Regional Government for Daesh’s invasion of Iraq is indisputable: it allowed jihadists to massacre Kurds of Yazi religion in Sinjar and enslave their women. Those who were rescued were rescued by Turkish and Syrian Kurds who had come specially to assist them under the mocking eye of the peshmergas, the Iraqi Kurdish soldiers.

Daesh committed many atrocities, imposing its reign through terror. Il carried out a religious cleansing against the Yazidi Kurds, Assyrian Christians, Shia Arabs etc. These "rebels" have received financial and military assistance from the CIA, the Pentagon and at least 17 states, as reported and documented by the Bulgarian daily newspapers Trud [6] and the Croatian Jutarnji list [7]. With trained staff in Fort Benning (USA), Daesh collected taxes and opened public services until it became a "state" although no one recognized it as such.

We do not know how the PKK transformed itself in 2005 from a pro-Soviet Marxist-Leninist political party into a pro-Atlantic libertarian and environmentalist militia. And even less how the Syrian YPG operated its transformation in 2014. It came under the operational command of Turkish officers from the PKK and NATO. Depending on the side of the Turkish-Syrian border, the PKK-YPG is internationally qualified differently. If it is positioned in Turkey, it is "a terrorist organization", but if it is in Syria, it becomes "a political party opposed to the dictatorship". Yet until 2014, it did not see a dictatorship in Syria. It was fighting for the defence of the Syrian Arab Republic and the retention of President Bashar al-Assad in power.

The YPG has respected the laws of war and has not committed atrocities comparable to those of Daesh, but it has not hesitated to ethnically clean up the north-east of Syria to create the "Rojava", which constitutes a crime against humanity. It despoiled and expelled hundreds of thousands of Assyrians and Arabs. It thought it was fighting for its people, but it was only making the Pentagon’s dreams come true. To do so, it publicly benefited from the Pentagon’s armament, as well as the British military weekly Jane’s [8] and the Italian daily Il Manifesto [9] have shown, and France, as François Hollande has revealed. Rojava did not have time to merge with the Kurdish region of Iraq.

After the fall of the Caliphate, among other things under the blows of the PKK/PYG, the latter asked the Damascus government for permission to cross the lines of the Syrian Arab army to rescue the North-West Kurds threatened by the Turkish army. Permission was granted.. But when the PKK/YPG moved, it was transporting fugitive Daesh officers who were arrested by the Syrian Arab Republic.

These documents and facts do not tell us which protagonists are right or wrong, that is another matter. But on the ground, it is impossible to be both against Daesh and for the PKK/YPG without falling into irreconcilable contradictions.

Donald Trump’s actions consisted in destroying the pseudo-states manufactured by the Pentagon: the Caliphate and the Rojava; this does not mean the end of Daesh or the end of the PKK/YPG.