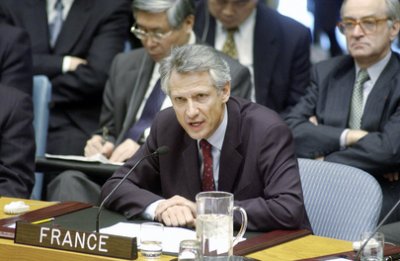 On February 14, 2003, French Foreign Minister Dominique de Villepin speaks before the UN Security Council to express France’s opposition to the invasion of Iraq proposed by the United States.

Mali, a friendly country, collapses. Jihadists advance towards the south, the situation is urgent.

But let’s not give in to the reflex of war for the sake of war. The unanimity of those wanting to go to war, the apparent haste, déjà vu arguments of the "war against terrorism" concern me. This is not France. Let us learn from the decade of lost wars in Afghanistan, Iraq, Libya.

These wars have never built a strong and democratic state. Instead, they promote separatism, failed states, the iron fist of armed militias.

Never have these wars allowed the defeat of terrorists swarming in the region. Instead, they legitimize the most radical ones.

These wars never have brought regional peace. Instead, Western intervention allows everyone to discard their responsibilities.

Worse, these wars are interlocked. Each creates the conditions for the next. They are battles in a single war spreading from Iraq to Libya and Syria, Libya to Mali by flooding the Sahara with smuggled weapons. It must end.

In Mali, none of the conditions for success have come together.

We will fight blindly, for lack of a clear war objective. Stopping the progression of the jihadist southward? Regaining the north? Eradicating the foundations of Al-Qaeda in the Islamic Maghreb (AQIM)? Each constitutes a war in itself.

We will fight alone, absent a solid Malian partner. Eviction of the President in March and of the Prime Minister in December, collapse of a fractured Malian army, general failure of the State? Who will support us?

We shall be fighting in a vacuum for lack of strong regional support. The Community of West African States lags behind and Algeria has shown its reluctance.

Only a political process can bring peace to Mali.

It takes a nationwide dynamic to rebuild the Malian state. Let’s bank on national unity, pressures on the military junta and a process of democratic guarantees and the rule of law through strong cooperation policies.

A regional dynamic is also required, by mobilizing the central actor that is Algeria and the Economic Community of West African States (ECOWAS) in favor of a plan to stabilize the Sahel.

Finally, we need political momentum to negotiate while isolating the Islamists and rallying the Tuareg behind a reasonable solution.

How has the neoconservative virus won so many minds? No, war is not France’s way. It is time to end a decade of lost wars. Ten years ago, almost to the day, we were meeting at the UN to intensify the fight against terrorism. Two months later began the intervention in Iraq. I have never ceased to seek political resolutions to crises and to speak out against the vicious circle of violence.

Today our country can lead the way out of this belligerent impasse if we invent a new model of engagement, based on the realities of history, the aspirations of peoples and respect for identities.

This is the responsibility of France in the face of history.

Source : “"No, war is not what France is all about"”, by Dominique de Villepin, Translation Roger Lagassé, Voltaire Network, 10 February 2013, www.voltairenet.org/article177482.html

Source : “"No, war is not what France is all about"”, by Dominique de Villepin, Translation Roger Lagassé, Voltaire Network, 10 February 2013, www.voltairenet.org/article177482.html