Who Makes Up the "Islamic Emirate"?

While Western public opinion is fed information about the constitution of a purported international coalition to fight against the "Islamic Emirate", the latter changes shape discreetly. Its principal officers are no longer Arab, but Georgian and Chinese. For Thierry Meyssan, this mutation shows that NATO ultimately intends to use the "Islamic Emirate" in Russia and in China. Therefore, both countries must act now against the jihadists before they return to sow chaos in their countries of origin. 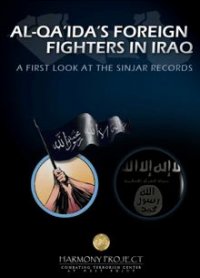 However, a few days after the seizure, Emir al-Baghdadi said his organization included only 200 fighters and they were all Iraqis. This lie is comparable to that of other terrorist organizations in Syria who say they enrol only incidentally a few foreigners, while the Syrian Arab Army estimated at at least 250,000 the number of foreign jihadists who fought in Syria over the past three years. Moreover, Caliph Ibrahim (the new name of Amir al-Baghdadi) now claims that his organization is composed largely of foreigners and that Syrian territory is no longer for the Syrians and the Iraqi territory is no longer for Iraqis, but they are for his jihadists.

According to records seized in Sinjar, 41% of foreign terrorists members of the "Islamic Emirate of Iraq" were Saudi nationals, 18.8% were Libyans, and only 8.2% were Syrians. If these figures are related to the population of each country, the people of Libya provided proportionately 2 times more fighters than that of Saudi Arabia and five times more than that of Syria.

Regarding Syrian jihadists, their origin was dispersed in the country, but 34, 3% came from the city of Deir ez-Zor, which since the withdrawal of the "Islamic Emirate" of Raqqa, became the capital of the Caliphate.

In Syria, Deir ez-Zor has the distinction of being populated predominantly by Sunni Arabs organized into tribes, and by Kurdish and Armenian minorities. However, until now, the United States has been only able to destroy states in Afghanistan, Iraq, and Libya, that is to say, countries where the population is organised into tribes. They have failed elsewhere. From this point of view, Deir ez-Zor in particular and the North East of Syria in general can therefore potentially be conquered, but not the rest of the country, as seen over the past three years.

Tarkhan Batirashvili, Sergeant of Georgian military intelligence, has become one of the main leaders of the "Islamic Emirate" under the assumed name of Abu Omar al-Shishani.

For the past two weeks, a purge is affecting Maghreb officers. Thus, Tunisians who took the Raqqa military airport on August 25 were arrested for disobedience, judged and executed by their superiors. The "Islamic Emirate" means to put its Arab fighters in their place and promote Chechen officers kindly provided by the Georgian secret services. 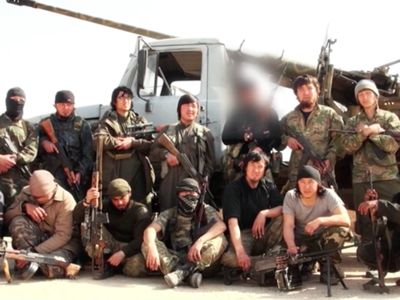 Abu al-Khazakhi Anisah, first Chinese jihadist of the "Islamic Emirate" killed in action (center of photo) was not Uighur, but Kazakh.

Another category of jihadist has emerged: the Chinese. Since June, the United States and Turkey have transported hundreds of Chinese fighters and their families to northeastern Syria. Some of them immediately became officers. They are mostly Uighurs, Chinese from the Peoples Republic, but Sunni Muslims and speakers of Turk.

Therefore, it is clear that, ultimately, the "Islamic Emirate" will expand its operations to Russia and to China, both countries are its ultimate targets.

We will definitely see a new NATO publicity campaign: its aviation will push the jihadists out of Iraq and leave them to settle in Deir ez-Zor. The CIA will provide money, weapons, ammunition and information to "revolutionary Syrian moderates" (sic) of the FSA, which will then change hats for use under the banner of the "Islamic Emirate", as has been the case since May of 2013.

John McCain and the chiefs of the Free Syrian Army. In the left foreground, Ibrahim al-Badri, with which the Senator is talking. Next, Brigadier General Salim Idris (with glasses).

At the time, Senator John McCain came to Syria illegally to meet the chiefs of staff of the FSA. According to the photograph then distributed to attest to the meeting, the staff included a certain Abu Youssef, officially sought by the US State Department under the name Abu Du’a, in reality the current Caliph Ibrahim. Thus, the same man was - both and at the same time - a moderate leader in the FSA and an extremist leader in the "Islamic Emirate".

With this information, one can appreciate at its true value the document presented to the Security Council on July 14 by the Syrian Ambassador, Bashar Jaafari. This is a letter from the commander-in-chief of the FSA, Salim Idriss and dated January 17, 2014. It reads: "I hereby inform you that this ammunition sent by the chiefs of staff to leaders of the revolutionary military councils of the Eastern Region must be distributed in accordance with what was agreed upon: two-thirds to the warlords of the el-Nosra front, the remaining third to be distributed between the military and the revolutionary elements in the fight against the bands of IEIL (Islamic Emirate in Iraq and the Levant). We thank you for sending us the proof of delivery of all ammunition, specifying the quantities and qualities, duly signed by the leaders and warlords in person, so we can forward them to the Turkish and French partners. "In other words, two NATO powers (Turkey and France) have delivered ammunition for two thirds to the Al-Nosra Front (classified as a member of al-Qaeda by the Security Council) and one third to the FSA so that it can fight against the "Islamic Emirate", headed by one of its senior officers. In fact, the FSA has disappeared on the ground and the munitions were therefore intended for two-thirds to al-Qaeda and one third to the "Islamic Emirate".

With this dual role device, NATO will be able to continue to launch its hordes of jihadists against Syria while claiming to fight them.

However, when NATO has installed chaos everywhere in the Arab world, including its Saudi ally, it will turn the "Islamic Emirate" against the two great developing powers, Russia and China. That is why these two powers should intervene now and nip in the bud this private army being constituted and trained by NATO in the Arab world. Otherwise, Moscow and Beijing will soon have to confront it on their own soil.