The fall of Palmyra upsets geopolitical balance in the Levant

The situation has considerably worsened in the Levant since the Islamic Emirate cut the ancient « Silk Road », the route which links Iran to the Mediterranean. There remain only two possible options : either via Deir ez-Zor and Aleppo, or else via Palmyra and Damascus. The first route has been disabled since the beginning of 2013, the second has just been cut. The fall of Palmyra will therefore have considerable consequences for the balance of the whole region. 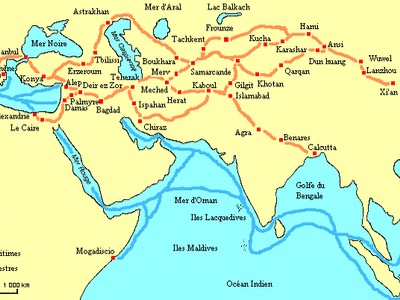 Lately, the Western press has dedicated its headlines to Syria - a situation that we haven’t seen for two years, during the affair of the chemical bombing of Ghouta and the NATO project for intervention. The journalists are worried about the progression of the Islamic Emirate and the possible destruction of the ancient city of Palmyra.

However, those who are familiar with the story of Queen Zenobia are few and far between. Profiting from the weakness of Rome, whom the Gauls had recently expulsed, she proclaimed her son Emperor and herself Regent, and went on to free not only Syria, but also the peoples of Egypt, Palestine, Jordan, Lebanon, Iraq, part of Turkey and even what is now Iran. Her capital, Palmyra, was a city of great refinement, open to all religions, a shining stage on the Silk Road which linked the Mediterranean to China. However, general Aurelian managed a coup d’etat in Rome and was able to restore the unity of the empire, crushing first of all Empress Zenobia, then the Gallic empire, before ending religious freedom, imposing the cult of the Sun and proclaiming himself God. This prestigious story makes Palmyra the symbol of Levantine Resistance to the Western imperialism of its day.

We may be surprised by the importance given to the fall of Palmyra by the Western press, particularly since the most important progression of Daesh this week was not in Syria, nor Iraq, but in Libya, with the fall of Sirte, a town whose population is five or six times greater than that of Palmyra. And yet the same journalists who had written at great length over the last two months about the chaotic situation in Libya, and called for a military intervention by Europe in order to staunch the flow of refugees, did not even mention it. It is true that in Libya, Daesh is commanded by Abdelhakim Belhaj, who was named military governor of Tripoli under the auspices of NATO, and officially recieved on the 2nd May 2014 in Paris by the Quai d’Orsay.

Reaching for a little extra drama, Western journalists affirm in unison that « Daesh now controls half of Syria » (sic). But their own maps contradict them, because they only show the control of a few towns and some roads, not whole regions.

Clearly, media treatment of the situation in the « wider Middle East » is not intended to provide an account of reality, but to instrumentalise certain elements which have been carefully selected to justify politicy.

Daesh and the importance of Palmyra

We would hope that the emotion caused by the fall of Palmyra is sincere, and that the Western powers, after having massacred several million people in the region over the last decade, have finally decided to halt these crimes. But we are not stupid. This ready-to-wear emotion is aimed at justifying a military reaction against, or concerning, Daesh.

Such a reaction is indispensable if Washington still wants to sign the agreement that it has been negotiating for the last two years with Teheran.

Indeed, Daesh was created by the United States with the support of Turkey, the Gulf monarchies and Israel, as we have always said, and as a partially declassified document released this week by the Defense Intelligence Agency (DIA) confirms. The reader can download this document at the bottom of the page.

Contrary to the nonsense published by certain journalists accusing the « Bachar régime » (sic) of having created this organisation in order to divide the opposition and force it towards radicalism, the DIA attests that the Islamic Emirate is a function of US strategy. The report, dated 12th August 2012, and widely distributed throughout the Obama administration, clearly announced Washington’s plans -

« If the situation resolves itself, there will arise the possibility of establishing a Salafist principality, recognised or not, in Eastern Syria (Hassake and Deir ez-Zor), which is exactly the objective of those who support the opposition [the Western states, the Gulf states and Turkey], in order to isolate the Syrian régime, considered to be the strategic spearhead of Chiite expansion (Iraq and Iran) ».

As we have always said, the Islamic Emirate was developed in January 2014 by a decision of the United States Congress, meeting in a secret session tasked with realising the Wright plan. The goal was to create a « Kurdistan » and a « Sunnistan » straddling Syria and Iraq, and designed to cut the « Silk Road » after the sale of Deir ez-Zor (the town was bought from corrupt officials without combat).

From the deepest Antiquity, a network of communication routes linked Xi’an (the ancient Chinese capital) to the Mediterranean. The route links Iran through the desert to the sea, either via Deir ez-Zor and Aleppo, or else via Palmyra and Damascus. Today, it is used for the transit of weapons to Syria and the Lebanese Hezbollah, and will probably be used to transport gas from the Fars field (Iran), to the port of Latakia (Syria).

Palmyra, the « desert city », is therefore not simply a vestige of a glorious past, it is also a strategic point for regional balance. That is why it is grotesque to pretend that the Syrian Arab Army did not attempt to defend it. In truth, the Army acted as it always has since the arrival of mercenaries in the country – in order to minimise civilian casualties, it withdraws when the mercenaries advance in small coordinated groups (thanks to means of communication supplied by the Western powers) and then strikes when they regroup.

The International anti-Daesh Coalition, created by the United States in August 2014, has never fought the jihadists. On the contrary, it has attested - not just once, but at least forty times – that Western aeroplanes have dropped weapons and munitions to the Islamic Emirate.

Moreover, the supposed Coalition of 22 states claims to dispose of a superior number of soldiers, who are better-trained and materially better-eqipped than Daesh. Yet they have never forced the Islamic Emirate to retreat, on the contrary, it continues to advance and conquer new routes.

The evolution of United States interests

In any event, Washington has changed its strategy. This is what the nomination of Colonel James H. Baker as the new Pentagon strategist demonstrates – the page of Chaos Strategy has been turned. The United States have reverted to a more classical imperial concept, founded on stable states - and in order sign their agreement with Iran, they now have to evacuate the Islamic Emirate before the 30th June.

The extravagant press campain about the fall of Palmyra may be the preparation of public opinion for a true military engagement against Daesh. That would be the meaning of the meeting of the 22 members of the Coalition (and 2 international organisations) in Paris, set for the 2nd June. Until then, the Pentagon will have to decide whether they are going to destroy the Islamic Emirate or displace them and use them for other tasks. Three possible destinations may be under consideration – move the jihadists to Libya, to black Africa, or to the Caucasus.

If they do not act, Iran will not sign, and the war will grind on to its paroxysm, because the fall of Palmyra under the action of the jihadists – fabricated by the West – will have the same consequences as the seizure of the region by Aurelin’s legions. Already, the survival of the « Axis of Resistance » is threatened – meaning the coalition Iran-Iraq-Syria-Lebanon-Palestine. Hezbollah is considering a decree for general mobilisation.