The Russian army asserts its superiority in conventional warfare

Moscow’s military intervention in Syria has not simply overturned the fortunes of war and spread panic throughout the ranks of the jihadist groups. It has also shown the rest of the world the current capacities of the Russian army in situations of real warfare. To everyone’s astonishment, it has proved to possess a system of signal jamming capable of rendering the Atlantic Alliance deaf and blind. Despite a far superior budget, the United States have just lost their military domination. 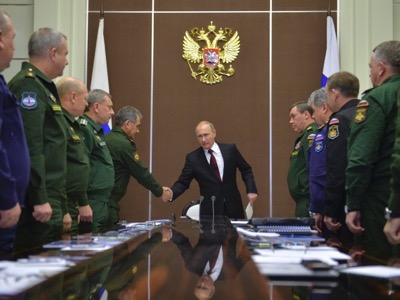 The Russian military intervention in Syria, which was at first considered a risky bet by Moscow against the jihadists, has transformed itself into a demonstration of power which upsets the strategic balance of the world [1]. Originally conceived to isolate and then destroy the armed groups equipped by states who support the jihadists in violation of the pertinent resolutions of the Security Council, the operation has now blinded all the Western actors and their allies.

The Pentagon is now divided between those who tend to minimise the facts while attempting to find a weakness in the Russian system, and those who, on the contrary, consider that the United States have lost their superiority in terms of conventional wafare, and that it will take long years before they are able to recover it [2].

We remember that in 2008, during the war in South Ossetia, although the Russian forces had managed to repel the Georgian attack, they had above all shown the world the deplorable state of their equipment. And only ten days ago, ex-Secretary of Defence Robert Gates and ex-National Security advisor Condoleezza Rice were describing the Russian army as a « second-rate » force. [3].

So how has the Russian Federation managed to rebuild its defence industry, and to design and produce very high-technology weapons without the Pentagon measuring the importance of the phenomenon, and allowing itself to be over-taken ? Have the Russians used all their new weapons in Syria, or do they have other surprises in reserve ? [4]

The confusion in Washington is so great that the White House has cancelled the official visit by Prime Minister Dmitry Medvedev and a delegation of the Russian Chief of Staff. This decision was taken after an identical visit to Turkey by a Russian military delegation. There is little point in discussing the operations in Syria, because the Pentagon does not know what is happening there. Furious, the « liberal hawks » and the neo-conservatives are demanding a relaunch of the military budget, and have succeeded in stopping the withdrawal of troops from Afghanistan.

In the most bizarre fashion, the Atlantist commentators who are witnessing the out-distancing of US military power are now denouncing the dangers of Russian imperialism [5]. And yet Russia is only acting to save the Syrian People, and proposing that other states work in collaboration with them, while the United States, when they enjoyed military pre-eminence, imposed their economic system and destroyed a number of states.

We are obliged to note that the hesitant declarations by Washington, published during the Russian deployment before the offensive, should not be interpreted as a slow political adaptation of official rhetoric, but should be understood for what they actually reveal – the fact that the Pentagon did not know the terrain. It had become deaf and blind.

A system of generalised jamming

We know, since the incident of the USS Donald Cook in the Black Sea on the 12th April 2014, that the Russian Air Force has at its disposition a weapon which enables it to jam all radars, all control circuits, all systems for the transmission of information, etc. [6]. Since the beginning of its military deployment, Russia had installed a jamming centre at Hmeymim, to the North of Latakia. Then, suddenly, the USS Donald Cook incident occurred, but this time within a perimeter of 300 kilometres – which includes the NATO base at Incirlik (Turkey). And this is still going on. Because the event happened during a sand-storm of historical proportions, the Pentagon first thought its measuring equipment had malfunctioned, but then discovered that it had been jammed. Completely.

Modern conventional warfare is based on what is known as « C4i » - an acronym which corresponds to the English terms « Command », « Control », « Communications », « Computer » and « intelligence ». The satellites, planes and drones, ships and submarines, tanks and now even the combatants themselves, are all connected to one another by a system of permanent communication, which enables the Chiefs of Staff to oversee and command the fighting more efficiently. It is this entire system - NATO’s nervous system – which is presently jammed in Syria and part of Turkey.

According to the Romanian expert Valentin Vasilescu, Russia has installed several Krasukha-4, equipped its planes with SAP-518/ SPS-171 jamming equipment (like the plane that overflew the USS Donald Cook), and its helicopters with the Richag-AV system. Besides this, it is using the spy-ship Priazovye (Project 864 Vishnya class, to use NATO terminology), in the Mediterranean [7].

It seems that Russia has agreed not to interfere with Israëli communications – a US preserve – which means that it will not deploy its jamming system in South Syria.

Russian planes have enjoyed the privilege of violating Turkish air space many times. Their purpose was not to measure the reaction time of the Turkish Air Force, but to verify the efficiency of their jamming capabililies in the area concerned, and also to keep an eye the installations which are at the disposition of the jihadists in Turkey.

Russia has used several new weapons, like the 26 stealth (or LO technology) cruise missiles (3M-14T Kaliber-NK), equivalent to the American RGM/UGM-109E Tomahawk [8]. Fired by its fleet in the Caspian Sea – with no military necessity – they reached and destroyed 11 targets situated at 1,500 kilometres distance, in the non-jammed area – so that NATO could appreciate their performance. These missiles crossed Iranian and Iraqi air space at an altitude varying between 50 and 100 metres, depending on the terrain, and flying just four kilometres away from a US drone. None of them were lost, compared to US missiles, which have a margin of error beteen 5 % and 10 %, depending on the models [9]. At the same time, this salvo demonstrated the waste of the incredible sums of money spent on the useless « anti-missile shield » built by the Pentagon around Russia –even though it was officially intended for protection against Iranian launch sites.

Taking into account that these missiles can be fired from submarines situated anywhere in the oceans, and that they can transport nuclear warheads, the Russians have clearly made up for their delay as far as launchers are concerned.

Only the Russians and the Syrians are capable of evaluating the situation on the ground. All the other military information from other sources, including the jihadists, are without foundation, since only Russia and Syria have an overall picture of the terrain. Moscow and Damascus intend to profit as far as possible from their advantage, and are therefore keeping their operations secret.

From the official communiqués and the confidences of certain officers, we may conclude that at least 5,000 jihadists have been killed, including several leaders of Ahrar el-Sham, al-Qaïda and the Islamic Emirate. At least 10,000 mercenaries have fled to Turkey, Iraq and Jordan. The Syrian Arab Army and Hezbollah have re-captured the area without waiting for the promised Iranian reinforcements.

The bombing campaign should end by the Orthodox Christmas. The question which will then have to be answered is whether or not Russia will be authorised to finish its job by pursuing the jihadists who have found refuge in Turkey, Iraq and Jordan. Failing this, Syria will have been saved, but the problem will still not have been resolved. The Muslim Brotherhood will not fail to seek revenge, and the United States will not fail to use them again against other targets.

The Russian operation in Syria was designed to deprive the jihadist groups of the support they receive from various states under the cover of aid for the « democratic opposition ».

The operation demanded the use of new weaponry, and transformed itself into a demonstration of Russian force.

Russia now has the capacity for jamming all NATO communications. It has now become the primary power in terms of conventional warfare

This performance has stoked discord in Washington. It is still too soon to say whether this will favour President Obama, or whether it will be used by the « liberal hawks » to justify an increase in the military budget.

[4] The only available study is well below reality : Russia’s quiet military revolution and what it means for Europe, Gustav Gressel, European Council on Foreign Relations, October 2015.