It’s a fact, not an analysis, not even an opinion – the « free and open international order» promoted since 1945 by the United States has cost the lives of 20 to 30 million people throughout the world. No President, whoever he may be, has managed to slow the rhythm of this killing machine. 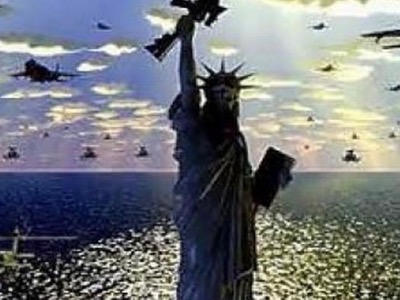 In the summary of its last strategic document - 2018 National Defense Strategy of the United States of America (of which the entire text is classified) - the Pentagon claims that « after the Second World War, the United States and their allies installed a « free and open international order in order to safeguard the freedom of the people from aggression and coercion », but that « this order is presently undermined by Russia and China, who are violating the principles and rules of international relations ». This is a total reversal of historical reality.

Professor Michel Chossudovsky, director of the Center for Research on Globalization, reminds us that these two countries, listed today as enemies, are those which, when they were allied with the United States during the Second World War, paid the victory over the Nazi-fascist Axis Berlin-Rome-Tokyo with the greatest price in human lives – approximately 26 million from the Soviet Union and 20 million from China, compared with a little more than 400,000 from the United States.

With this preliminary, Chossudovsky introduces to Global Research a documented study by James A. Lucas on the number of people killed by the uninterrupted series of wars, coups d’État and other subversive operations executed by the United States from the end of the War in 1945 until now – a number estimated at 20 to 30 million victims [1]. Approximately twice the number of deaths from the First World War, the centenary of the end of which has just been celebrated in Paris with a Peace Forum.

Apart from the deaths, there are the wounded, who very often find themselves crippled for life – some experts calculate that for every person killed in war, ten others are wounded. This means that the number of people wounded by US wars should be counted in the hundreds of millions.

To this estimation in the study we must add a non-quantified number of dead, probably hundreds of millions, which have been caused, from 1945 until today, by the indirect effects of wars - famine, epidemics, forced migrations, slavery and exploitation, environmental damage, subtraction of resources from vital needs in order to cover military expenditure.

The study documents the wars and coups d’État executed by the United States in 30 Asian, African, European and Latin-American countries. It reveals that US military forces are directly responsible for between 10 and 15 million deaths, caused by the major wars – those against Korea and Vietnam and the two wars against Iraq. Between 10 and 14 million other deaths have been caused by the proxy wars waged by the allied armed forces trained and commanded by the USA in Afghanistan, Angola, Congo, Sudan, Guatemala and other countries.

The Vietnam War, which spread to Cambodia and Laos, caused a number of deaths estimated at 7.8 million (plus a huge number of wounded, and genetic damage affecting generations due to the dioxin sprayed by US aircraft).

The proxy war of the 1980’s in Afghanistan was organised by the CIA, which trained and armed – with the collaboration of Oussama ben Laden and Pakistan – more than 100,000 mujahideen to fight the Soviet troops who had fallen into the « Afghan trap » (as it was later described by Zbigniew Brzezinski, specifying that the training of the mujahideen had begun in July 1979, five months before the Soviet intervention in Afghanistan).

The bloodiest coup d’État was organised in 1965 in Indonesia by the CIA – it handed over the list of the first 5,000 Communists and others marked for death to the Indonesian murder squads. The number of people assassinated is estimated at between 500,000 and 3 million.

That is the « free and open international order » that the United States, independently of the White House, persist in pursuing in order to « safeguard the people from aggression and coercion ».