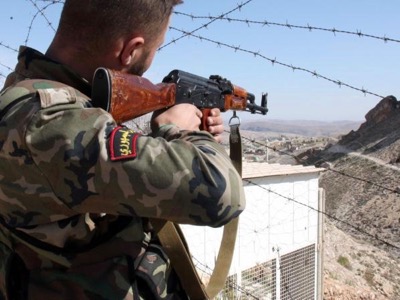 On instructions of my Government, and further to our previous letters relating to crimes committed by armed terrorist groups, I would like again to draw your attention to the following.

Whenever the Syrian Arab Army makes progress against terrorist groups anywhere in the Syrian Arab Republic, the States supporting terrorism will unfailingly mount a feverish propaganda campaign aimed at distracting attention from the terrorism, aggression and occupation to which the country is being subjected. Those States’ actions confirm that they have never had the slightest interest in protecting civilian lives. On the contrary, their primary concern has been to protect their investment in terrorism, into which they have poured tens of billions of dollars.

In that context, the Government of the Syrian Arab Republic wishes to recall the suffering inflicted on civilians by the actions of the armed terrorist groups, which over the past nine years have sown death and destruction wherever they have operated. They have used civilians as human shields, violated the sanctity of hospitals and schools, converting them into military bases, and subjected populous residential areas to indiscriminate shelling and rocket fire.

Their crimes against civilians continue unabated. Armed terrorist groups concentrated in the west of Aleppo Governorate and elsewhere have recently intensified their attacks on densely populated and hitherto safe neighbourhoods in Aleppo, Idlib and Ladhiqiyah, by shelling them and subjecting them to rocket fire, killing and wounding dozens of civilians, mostly women and children, in the process.

In order to deal with those crimes and as part of its determined efforts to protect the lives of innocent civilians caught in terrorist-held areas, the Government of the Syrian Arab Republic has taken numerous measures to ensure that humanitarian aid reaches them and to guarantee their safe and unhindered exit from those areas. However, those measures have been met with terrorism by armed groups located in remote parts of Aleppo Governorate and the city of Idlib. At the behest of their controllers, they continue to target civilians. They refuse to allow civilians to leave and continue to keep them as hostages and for use as human shields. They have targeted persons managing to flee towards the Abu al-Duhur, Habit and Hadir humanitarian corridors, which the Government of the Syrian Arab Republic has opened in order to secure the exit of civilians.

The Government of the Syrian Arab Republic will spare no effort to rescue civilians and extract them from terrorist-held areas. Its military operations and attacks against terrorists in the areas that they hold are directed at sources of fire and come in response to the repeated, criminal targeting of innocent civilians by terrorist gangs.

The Government of the Syrian Arab Republic shall continue to fulfil its constitutional and legal duty to combat terrorism and to deliver Syrians from the scourge and actions of armed terrorist groups. It shall do so in accordance with the principles of international law and Security Council resolutions on combating terrorism, as would any State that is fiercely attached to its independence and sovereignty within the United Nations.