New consultations for Syria in Geneva

While Ban Ki-moon’s representative for Syria, Staffan de Mistura, organises new consultations in Geneva between the government and its foreign-based opposition, Thierry Meyssan reviews the changes that have occurred in the country. He notes that for the last three years, the government has implemented the Geneva Communiqué, while the foreign-based opposition has refused to do so, thus gaining time and hoping for the overthrow of the Republic by the jihadists. 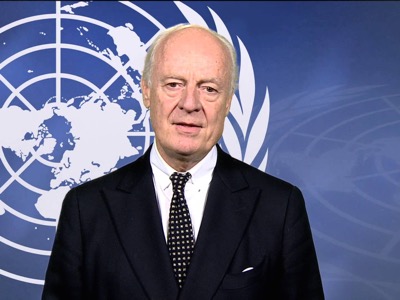 Ban Ki-moon’s representative for Syria, Staffan de Mistura, works under the orders of the NATO Director of Political Affairs, Jeffrey Feltman. However, when he was the United States ambassador in Beirut, Feltman organised the so-called ’Committee of Inquiry’ into the assassination of Rafic Hariri, and the Special Tribunal which was designed to condemn President Bachar el-Assad. It was a plot which ended with the scandal of the false witnesses and the resignation of Detlev Mehlis. It is therefore not the first time that the UNO has been used in a partisan manner, not for peace, but against Syria.

The United Nations are preparing four thematic work groups, « in order to initiate a movement in favour of a Syrian framework document for the implementation of the Geneva Communiqué », according to the presentation that Staffan de Mistura made to the Security Council [1].

But here is the problem – neither Lakhdar Brakimi nor Staffan de Mistura have ever spoken of the efforts undertaken by the Syrian Arab Republic, since the 30th June 2012, to conform to this text.

Let’s return three years into the past. The Syrian Arab Army had just defeated the Takfiri. Baba Amr’s Islamic Emirate had surrendered, and agreements had been secretly concluded with France and Turkey which specifically stipulated the restitution of imprisoned foreign officers in exchange for peace. The United States and Russia were discussing the sharing of the Middle East, and had summoned the « Action Group for Syria » for the composition of the « Geneva Communiqué ». We know that this agreement between the major powers was swept aside six days later by the Conference of the « Friends of Syria » in Paris, followed by the spectacular resignation of Kofi Annan. A second and far more bloody war then began. However, it was only marginally a Syrian civil war – in truth, it was mainly a war by foreign jihadists against Syria.

The Communiqué is based on the six-point plan by Kofi Annan, which itself is based on the five propositions of President Bachar el-Assad. It stipulated ; an end to violence, under the control of the United Nations ; the liberation of prisoners ; the unrestricted circulation of foreign journalists ; and the freedom of association and demonstration [2]. Besides this, in order to facilitate the transition from war to peace, the Communiqué evoked the creation of a transitional Government body to be composed by mutual consent, the elaboration of a new Constitution, and the engagement to work for national reconciliation.

What has happened since then ? First of all, certain signatories of the Communiqué (the United States, France, Kuwait, Qatar, the United Kingdom, Turkey), betrayed their commitment and resumed the war with the « Friends of Syria », organising the transfer of hundreds of thousands of combatants. Secondly, the « National Council » and the individuals who had joined the « National Coalition of Opposition and Revolutionary Forces » postponed the implementation of the Communiqué until after the « fall of the régime », and supported terrorism. Thirdly, the Syrian Arab Republic, the loyalist opposition and the armed ex-rebel groups, with no other help, began to apply the Communiqué and fight together against terrorism.

As a result, many prisoners were granted amnesty, hundreds of foreign journalists were able to visit the country in total liberty, and the political parties were able to develop according to their needs. The Republic and the rebel groups reached a number of reconciliation agreements. The President made several ministerial changes in order to include representatives from the new political organisations within a unified government which conforms to the description of a ’transitional government body’ as set out in the Communiqué .

There is still a long way to go. First of all, Syria will have to defeat terrorism – with the help of the CSTO - and also the totalitarian ideology of the Muslim Brotherhood. The Constitution must be fine-tuned, followed by a round of municipal elections in December, and then a general election once the cease-fire has been declared. Let’s hope that, this time, no-one will oppose these initiatives, and that everyone will participate and accept, democratically, the choice of the soveriegn People.