China deploys in the Near East

The Chinese President, Xi Jinping, has embarked on a tour of Saudi Arabia, Egypt and the Islamic Republic of Iran. Officially, he will not be speaking of politics, but only of economy. China is proposing that the states of the Near East participate in the construction of a new « Silk Road » in order to enhance their development and liberate themselves from Western colonialism. 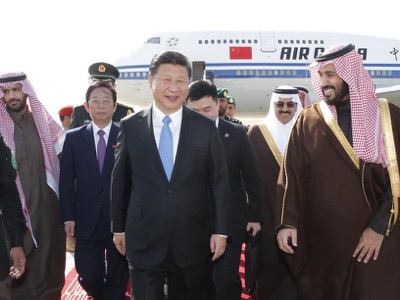 The Arab world today is dominated by the United States, who are intent on exploiting it and hindering its development. However, numerous revolts, in Palestine, Syria, Iraq, Yemen and Bahreïn, attest to a will to resistance which is in contrast to the voluntary servitude of the Europeans.

This game, entirely controled by Washington since Henry Kissinger’s diplomatic successes, has been upset, on the one hand, by the Russian military intervention in Syria and, on the other hand, by the return of Chinese commerce, which dominated the Mediterranean in late Antiquity and the Middle Ages. It is in this context that President Xi Jinping has undertaken journeys to Saudi Arabia, Egypt and the Islamic Republic of Iran, with the aim of opening up sections of a new communications route which will be, according to the slogan of the Chinese leader since 2013 - « a beltway, a road ». This indicates both an earth-bound route, like the old « Silk Road » and a maritime route like the one imagined during the Ming dynasty by Admiral Zheng He. In order to succeed in this project, which is of capital importance, and which has been in preparation for the last ten years, the People’s Republic of China last year created the Asian Infrastructure Investment Bank (AIIB), of which the three states that Xi is visiting are members – even though Iran has not yet ratified the treaty.

Although the Chinese President avoids mentioning politics and directly opposing Western interests, his economic project, if it were to come about, would lead to Sino-Russian leadership of the world, and would mark the end of the thalassocratic empire of the United Kingdom and the United States.

It would be wrong to believe that Beijing is uninterested in politics and is absent from the region on the political level. China supported the combat of the Palestinian Resistance, which opened a representative office in Beijing many years ago. In 2006, Chinese air-sea missiles enabled Hezbollah to prevent Israël from bombing the Lebanese coast. And according to a number of experts, these missiles were not piloted by Arabs, but by Chinese advisors. Today, China has invited itself to the negotiations concerning Syria, and over the last few months, has received representatives from all factions. However, Xi has limited his political interventions during his journey.

The People’s Republic of China produced a blockbuster film in 2015, Dragon Blade, about the « Silk Road » during late Antiquity. It is aimed at demonstrating that Empires do not necessarily have to be enemies,but can co-operate for their recciprocal interests.

China is Saudi Arabia’s main client, from whom it imports 70 billion dollars worth of oil per year. It is hoping the Saudis will allow Chinese merchandise to cross their state [or more accurately, their property]. However, the Chinese and the Saudis are rivals in Pakistan, and are fighting a bitter war in the Xinjiang. For at least a decade, the United States have been recruiting Chinese jihadists via the Saudi services, during the pilgrimage to Mecca. They are often Uyghurs, and are piloted by the Turkish services to commit terrror attacks in the name of the Islamic Emirate, originally in Western China, but now all over the country.

King Salmane and President Xi together inaugurated the refinery in Yasref-Yanbu, on the country’s West coast. It is the first refinery built abroad by Sinopec. It cost 10 billion dollars, and is owned for two thirds by Aramco and one third for the Chinese company. This gigantic factory, built in the space of two years, is an investment which appears when the US International anti-Daesh Coalition have already bombed and destroyed all the equivalent Chinese investments in Iraq. In the event of a future partition of Arabia, the refinery will find itself in a state constituted around the holy mosques.

In 2009, Chinese national television broadcast a 59-episode series on the life and voyages of Zheng He, the « grand eunuch of the three jewels », who, in the 15th century, attempted to restore the « Silk Road », but this time by sea. He built a fleet of 70 ships and 30,000 sailors. He made the pilmgrimage to Mecca, sailed up the Red Sea to Egypt, and then journeyed down the coast of Africa as far as Mozambique. The series makes a point of the pacific nature of his 7 expeditions. For reasons of internal politics, at his death, his writings were burned, the Emperor dismantled his fleet, and China withdrew into itself for 600 years.

On his arrival in Egypt, President Xi met his opposite number, General al-Sissi. The two men assessed the work involved in the extensions to the Suez Canal. Last year, the Western powers had been astounded by the Pharaonic scope of the project and the huge effort made by Cairo, considering that Egypt is unable to feed its population and only survives thanks to help from the Saudis. It is now clear that this enterprise, which makes no sense in terms of current global business, is part of China’s middle-term project.

A vast industrial zone has been opened at the exit of the Canal, 120 kilometres from Cairo. Unprecedented investments have been planned, which will allow the employment of 40,000 Egyptians. Already, the Chinese have invested in Egyptian quarries, to such an extent that stone has become the backbone of commerce between the two states.

Besides this, China is participating in the construction of a new Egyptian capital.

Cairo, which was in Nasser’s day the main Arab power, has progressively withdrawn from the international stage. The victory of President al-Sissi over the Muslim Brotherhood, coupled with the relative stabilisation of the country, now enable him to consider the possibility of Egypt once again asuming that place. The disovery by Italians of considerable reserves of oil promise the rapid resolution of his economic problems, and already allow him to borrow money on the international market.

The Chinese delegation, remembering the relations between the two states in the time of Nasser and Zhou Enlai, met with the President of the Chamber of Deputies, Ali Abdel Aal, and installed an institutional co-operation with the People’s Assembly.

President Xi and his Egyptian opposite number publicly declared their support for the political process in Syria and challenged any attempt to overthrow the régime by force. However, they did not specify the content of their exchanges on this subject.

Finally, President Xi addressed the Arab League. He underlined the enormous commercial potential of the region and the necessity for peaceful collaboration between nations in order to accelerate economic development.

The Islamic Republic of Iran

As I write these lines, President Xi has just arrived in Iran. The two nations have a long common history since Antiquity, as demonstrated by certain statues in Persepolis, and the Chinese influence on Iranian painting. In the Middle Ages, the « Silk Road » bypassed India, and traversed Central Asia to cross Iran, then Iraq and Syria. Since President Ahmadinejad, Iranian universities have reduced their teaching of English and increased the practise of Chinese.

For Beijing, Iran is not simply a historical stage on the « Silk Road », but a neighbouring culture from which it has long been separated, a natural partner which, because of its Muslim identity, allows it to enter more easily into an Arab world which it perceives overall as backward and violent.

The People’s Republic of China and the Russian Federation have announced their intention to make the Islamic Republic of Iran a full member of the Shanghai Co-operation Organisation. This decision, which had been postponed during the period of Western sanctions, will make Teheran a major actor in international relations.

China intends to continue the construction of the new Silk Road through the Arab world. It has already obtained the extension of the Suez Canal. It is acting prudently with Saudi Arabia and seems more comfortable with Egypt and Iran.

Beijing is interested in commercial exchanges with the Near East, but even more so with Europe by way of the Near East.

Although it abstains from demostrating on the political level, China is discretely present with the Arab Resistance movements against Western imperialism. Iran will shortly become a full member of the Shanghai Co-operation Organisation.