The 70th anniversary of NATO will be celebrated in Washington, where President Donald Trump, having lost the majority in the House of Representatives, has been obliged to accept an alliance with the US Deep State. So now we are waiting for them to reveal their common objectives, or at least the means they have decided to implement in order to achieve them. 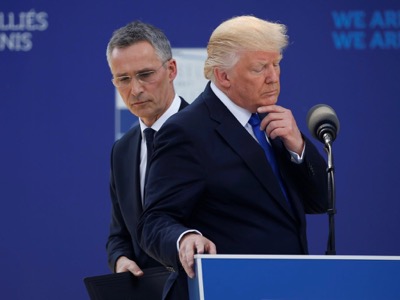 The 70th anniversary of NATO will be celebrated by the 29 Ministers for Foreign Affairs of the Alliance, meeting in Washington on 4 April; a modest North Atlantic Council compared with the higher-level meeting of the heads of state and government. This was what President Trump wanted, not being too happy with the allies, particularly since the majority of them are taking their time to readjust their military spending to what Washington is asking.

The meeting will be chaired by the General Secretary of NATO, Jens Stoltenberg, whose mandate the North Atlantic Council has just renewed for two further years, for services rendered to the United States.

Stoltenberg’s agenda in Washington has been organised on the basis of attentive management, in order to confirm who is in charge of the Alliance. On 2 April, the General Secretary will be received by President Donald Trump at the White House. On 3 April, he will be speaking to the two Houses of Congress, and will be received by the Secretary of State, Michael Pompeo. Then, having received his latest orders, he will chair the North Atlantic Council on 4 April. The North Atlantic Council has just approved the nomination of US Air Force General Tod Wolters as Supreme Allied Commander in Europe, replacing US Army General Curtis Scaparrotti.

According to « tradition », for the last 70 years, the Supreme Allied Commander in Europe has always been a US General nominated by the President of the United States. Since the General in charge of the Supreme Command of NATO is also in charge of the US Command for Europe (EuCom), NATO is de facto introduced into the chain of command which is directed by the President of the United States.

We do not yet know what General Wolter’s priorities will be, but they will certainly be no different from those of General Scaparrotti: above all, « to safeguard the interests of the United States and support a unified and peaceful Europe », an engagement which sounds tragically grotesque twenty years after the war by which NATO, under US command, demolished the Yugoslav Federation.

The priority of the day – declares General Scaparrotti – is that the European infrastructures must be potentiated and integrated in order to enable US and NATO forces to be rapidly positioned against the « Russian aggression ». Thus NATO, under US command, is pursuing its seventy-year programme from one war to the next. From the Cold War, when the United States maintained the Allies under their domination, using Europe as its front line for nuclear confrontation with the Soviet Union, to the current confrontation with Russia, provoked by the United States for the same fundamental reasons.

We will be talking about this scenario at the

INTERNATIONAL SYMPOSIUM
« 70 years of NATO: what is the historical report?
Leave the war system - now »

Themes for the round tables:

Yugoslavia: twenty years ago, the founding war of the new NATO.

NATO’s two fronts - the East and the South.

Europe on the front line of the nuclear confrontation.

Culture of peace or culture of war?

In order to participate in the Symposium (free entry) please communicate your name and place of residencce to G. Padovano: Email [email protected] / Cell phone: 393 998 3462