The Circuit of Death in the « Greater Mediterranean »

A very strange traffic is crossing the Mediterranean – in one direction, weapons to Africa and the Middle East – in the other, refugees who are the victims of these weapons. Unsurprisingly, the European political leaders are pretending not to know the main cause of these migrations. 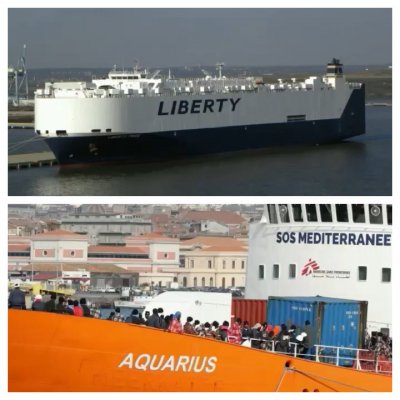 The politico-media projectors, focussed as they are on the migratory flow from South to North across the Mediterranean, are leaving other Mediterranean flows in the dark – those moving from North to South, comprised of military forces and weapons. Perhaps we should say the « Greater Mediterranean », an area which, in the framework of USA / NATO strategy, stretches from the Atlantic to the Black Sea, and to the South, from the Persian Gulf as far as the Indian Ocean.

During his meeting with NATO Secretary Jens Stoltenberg, in Rome, Prime Minister Giuseppe Conte pointed out the « centrality of the greater Mediterranean for European security », now threatened by the « arc of instability stretching from the Mediterranean to the Middle East ». Which is why it is important for NATO, an alliance under US command, which Conte describes as the « pillar of interior and international security ». This is a complete inversion of reality.

It is the foundation of USA / NATO strategy which in fact provoked the « arc of instability » with its two wars against Iraq, the two other wars which demolished the states of Yugoslavia and Libya, and the war aimed at demolishing the state of Syria. According to Conte, Italy, which participated in all these wars, plays « a key role for the security and the stability of the Southern flank of the Alliance ».

In what way? We can discover the truth by what the medias are hiding. The US navy ship Trenton, which welcomed aboard 42 refugees (authorised to land in Sicily, unlike those of the Aquarius), is not based in Sicily in order to carry out humanitarian actions in the Mediterranean – it is in fact a rapid force unit (up to 80 km/h), capable of landing on the coasts of North Africa, within a few hours, an expeditionary force comprising 400 soldiers and their vehicles. US Special Forces are operating in Libya to train and lead allied army formations, while US armed drones, taking off from Sigonella (Sicily), hit their targets in Libya. In a short time, announced Stoltenberg, NATO drones will also be operating from Sigonella. They will integrate the « Hub » or « NATO Strategic Direction South » (NSDS), the intelligence centre for military operations in the Middle East, North Africa, the Sahel and Sub-Saharan Africa.

The Hub, which will become operational in July, has its headquarters in Lago Patria, alongside the Joint Force Command of NATO (JFC Naples), under the orders of a US admiral - presently James Foggo – who will also command US naval forces in Europe (with their headquarters at Naples-Capodichino, and the Sixth Fleet based in Gaeta) and also the US naval forces for Africa. These forces have been integrated by the aircraft-carrier Harry Truman, which entered the Mediterranean two months ago with its attack group.

On 10 June, while media attention was focussed on the Aquarius, the US fleet, carrying 8,000 soldiers, and armed with 90 fighters and more than 1,000 missiles, was deployed in the Eastern Mediterranean, ready to strike in Syria and Iraq. At the same time, on 12-13 June, the Liberty Pride docked at Livorno – it is a militarised US ship, and carried on its 12 bridges further cargos of weapons which, from the US base of Camp Darby (Pisa), are sent every month to Jordan and Saudi Arabia to cultivate the wars in Syria and Yemen.

This is how we feed these wars, which, using neo-colonial methods of exploitation, provoke the pauperisation and uprooting of populations. Consequently, the migratory flow continues to increase dramatically, creating victims and new forms of slavery. « It seems that being tough on immigration now pays », commented President Trump, referring to the measures decided not only by Matteo Salvini, but by the totality of the Italian government, whose Prime Minister is qualified as « fantastic ».

This is fair recognition on the part of the United States, which, in the government’s programme, is defined as a « privileged ally » of Italy.