The Turkish invasion of Rojava

While the international community publicly fears the brutality of the Turkish intervention in northern Syria, it unofficially welcomes this intervention as the one and only solution to bring peace to the region. The war against Syria ends with one more crime. The fate of Idleb’s foreign mercenaries, the rabid jihadists during eight years of a particularly savage and cruel war, has yet to be determined. 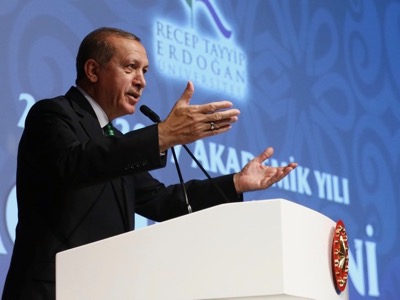 On October 15, 2016, President Erdoğan solemnly announced that his country would carry out the national oath of Mustafa Kemal Atatürk. Turkey, which already militarily occupies part of Cyprus and Iraq, claims part of Syria and Greece. Its army is preparing.

In 2011, Turkey organized, as requested, the migration of 3 million Syrians in order to weaken the country. Subsequently, it supported the Muslim Brotherhood and their jihadist groups, including Daesh. It looted Aleppo’s machine tools and set up counterfeit factories in the Islamic Emirate.

Intoxicated by its victories in Libya and Syria, Turkey has become the Protector of the Muslim Brotherhood, has moved closer to Iran and has challenged Saudi Arabia. It deployed military bases all around the Wahhabi Kingdom in Qatar, Kuwait and Sudan, then hired Western public relations firms and destroyed the image of Prince Mohamed Ben Salmane, particularly with the Kashoggi case[1]. Gradually, it considered expanding its power and aspired to become the 14th Mongolian empire. Misinterpreting this development as being the work of Recep Tayyip Erdoğan alone, the CIA made several attempts to assassinate him, even provoking the failed coup d’état in July 2016. Three years of uncertainty followed, ending in July 2019 when President Erdoğan decided to favour nationalism over Islamism[2]. Today, Turkey, although still a member of NATO, transports Russian gas into the European Union and buys S-400s in Moscow[3]. It watches over its minorities, including Kurds, and no longer demands they be Sunni Muslim, but only loyal to its homeland.

During the summer, President Donald Trump announced his intention to withdraw his troops from all of Syria, starting with the Rojava (already formulated on December 17, 2018), on the express condition of cutting the line of communication between Iran and Lebanon (which is new). Turkey entered into this commitment in exchange for a military occupation of the Syrian border strip from which terrorist artillery could bombard it.

Russia has indicated that it does not support YPG criminals against humanity and would accept Turkish intervention if the Christian population were allowed to return to its land. This is what Turkey has committed itself to.

Syria has indicated that it would not repel a Turkish invasion in the immediate future if it could liberate an equivalent territory in the Idleb governorate. Turkey has accepted this.

Iran has indicated that, although it disapproves of Turkish intervention, it will intervene only for the benefit of the Shiites and is not interested in the fate of the Rojava. Turkey has taken note of this. 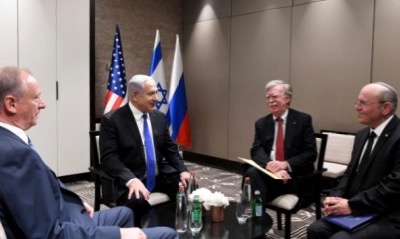 The principle of the end of the Rojava was endorsed at the US/Russia summits held in Tel Aviv and Geneva in June and August 2019.

Several international summits have been held to examine the consequences of these positions and identify subordinate points (for example, oil from the Syrian border strip will not be exploited by the Turkish army, but by a US company). The first summits brought together American and Russian security advisors. The second, the Russian, Turkish and Iranian heads of state.

On July 22, 2019, Turkey announced the suspension of its migration agreement with the European Union[4].

On August 3, President Erdoğan appointed new senior officers, including Kurds, and ordered the preparation of the invasion of Rojava[5].

He also ordered the Turkish army to withdraw before the Syrian Arab army in the governorate of Idleb, so that it could liberate a territory equivalent to the one that would be invaded in the East.

On August 23, the Pentagon ordered the dismantling of the YPG fortifications so that the Turkish army could conduct a lightning offensive[6].

On August 31, in support of the Syrian Arab army, the Pentagon bombed a meeting of Al Qaeda leaders in Idleb with Turkish intelligence[7].

On September 18, President Trump changed his security advisor and appointed Robert O’Brien. This discreet man knows President Erdoğan well with whom he settled the consequences of the failed coup d’état of July 2016[8].

On October 1, President Erdoğan announced the imminent relocation of 2 million Syrian refugees to the Rojava territory[9].

On October 5, the United States asked members of the International Coalition to recover their jihadist nationals from Rojava. The United Kingdom requested their transfer to Iraq, while France and Germany refused[10].

On October 6, the United States declared that it was no longer responsible for the jihadists held prisoner in Rojava, which was to be transferred to Turkish custody.

On October 7, US Special Forces began their withdrawal from Rojava.

On October 9, the Turkish army - led by Kurdish officers in particular - and Turkmen militiamen who had recovered the flag of the Free Syrian Army invaded the 32-kilometre deep strip of Syrian territory occupied by the YPG.

Operation "Source of Peace" is perfectly legal under international law if it is limited to the 32-kilometre border strip and does not give rise to an indefinite Turkish occupation[11]. That is why the Turkish army uses Syrian Turkmen militias to hunt down the YPG in the rest of Rojava. 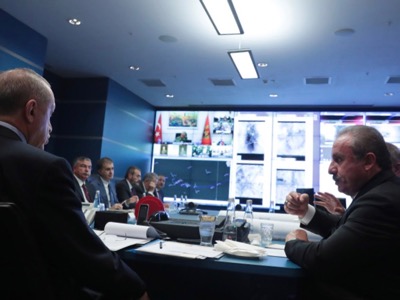 The international press, which has not followed the events on the ground and has been satisfied with the contradictory official statements of recent months, is astounded. All states in unison denounce the Turkish operation, including the United States, Russia, Israel, Iran and Syria, although they have all negotiated and validated it. Those who threaten Turkey must consider the possible migration of their experienced Idleb jihadist nationals.

The Security Council is meeting urgently at the request of President Macron and Chancellor Merkel. To avoid showing that no one really opposes Turkish intervention, not even France, the meeting is held in camera and is not the subject of a statement by the President of the Council. 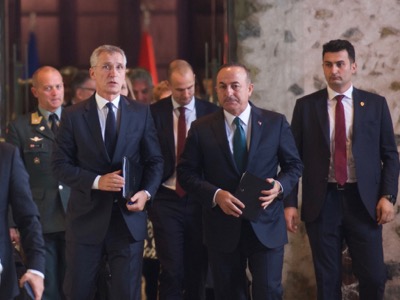 Despite requests from France and Germany, the Atlantic Council did not meet. On October 11, NATO Secretary General Jens Stoltenberg came to Ankara to ensure that the operation was working. He celebrated the greatness of Turkey, thus shutting the beaks of the Germans and the French[12].

On October 13, in the midst of a debacle, the management of the YPG was changed. On Russian advice, the Kurdish leaders, who have always been in negotiations with the Syrian Arab Republic, came to express their allegiance to it on the Russian base of Hmeimim[13]. However, some members of the YPG management contest the renunciation of Rojava.

On October 14, President Donald Trump imposed sanctions against Turkey. They are purely symbolic and allow Ankara to continue its attack without paying attention to criticism[14].

President Donald Trump has thus succeeded in putting an end to the Rojava issue. The Russian army has invaded the US bases, abandoned by the GIs, demonstrating the place that Moscow now occupies in the region as a replacement for Washington. Syria, while denouncing the Turkish intervention, has liberated a quarter of its territory. Turkey is resolving the issue of Kurdish terrorism and is considering resolving the issue of Syrian refugees. The temptation will be great for her not to stop there.