Italy in the « Antiterrorist Coalition »

The Antiterrorist Coalition met on 14 November 2019 in Washington, at the specific request of France, which was confused by the changes of US policy in Syria. This meeting changed nothing concerning the strategy of the USA and its allies, but enabled Secretary of State Mike Pompeo to remind the French of their role as simple ’worker bees’. It is also an occasion for Manlio Dinucci to publish an update on the exploits of this Coalition. 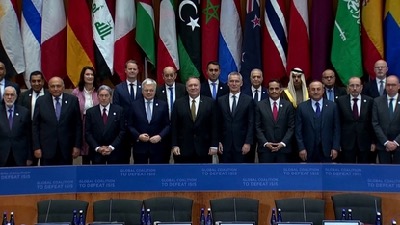 When he welcomed to Rome the five soldiers who were wounded in Iraq,the Minister for Foreign Affairs Luigi Di Maio declared that « the Italian State will not retreat one centimetre in the face of the Terrorist threat, and will react with all its force against those who spread terror ». He then flew to Washington in order to participate in a reduced group of the « Global Coalition against Daesh » which includes, under US command, Turkey, Saudi Arabia, Qatar, Jordan, and other countries which used to support Daesh/Isis and other similar terrorist formations by supplying them with weapons and training (as we have documented here).

The Coalition – which includes NATO, the European Union, the Arab League, the Community of Sahel-Saharan States (CEN-SAD) and Interpol, plus 76 singular States – claims in its communiqué of 14 November to have « liberated Iraq and Northern-Oriental Syria from the control of Daesh/Isis », although it is obvious that the forces of the Coalition had deliberately left Daesh/Isis with its hands free [1].

This terrorist formation and a few others were defeated only when Russia intervened militarily in support of the Syrian government forces. The Coalition also claims to have « furnished 20 billion dollars of humanitarian aid for the stabilisation of the Iraqi and Syrian peoples, and trained and equipped more than 220,000 members of the security forces to stabilise the local communities ». The goal of this « aid » is in reality not stabilisation, but the coninued destabilisation of Iraq and Syria, by relying on the instrumental support supplied above all by the various components of Kurdish independentism, aimed at destroying the national States, controling their territory and their energy ressources.

In the framework of this strategy, Italy, defined as « one of the greatest contributors of the Coalition », is engaged in Iraq mainly for the training of the « Kurdish Security Forces » (Peshmerga), notably in the use of anti-tank weapons, mortars and artillery, and the use of precision rifles in special training courses for snipers. Currently, approximately 1,100 Italian soldiers are operating in Iraq, divided into various detatchments in different areas, supplied with more than 300 land vehicles and 12 aircraft, for a cost in 2019 of 166 million Euros. Apart from the unit in Iraq, there is an Italian air division based in Kuwaït, with 4 Typhoon fighter-bombers, 3 Predator drones and a tanker-plane for in-flight refuelling.

In all probability, Italian special forces, to whom the five wounded soldiers belonged, are participating in combat missions even though their official mission is only training. The use of special forces is of course secret. It is presently becoming even more so because their command centre, the Comfose, has been transfered to the Folgore barracks in Pisa right next to the Camp Darby area , which is the largest US arsenal outside of the United States motherland, where training activities also take place.

In the Coalition, Italy also assumes the mission of co-directing the « Finacial Group of Opposition to Daesh » with Saudi Arabia and the United States. In other words, those who financed and organised the arming of the forces of Isis and other terrorist formations [2]. Emboldened by these merits, the Minister for Foreign Affairs Di Maio put forward a proposition, immediately accepted, that Italy could be the seat of the plenary meeting of the Coalition in 2020. In this way, Italy would also have the honour of welcoming certain tireless opponents of terrorism like Saudi Arabia, which, after having financed Daesh, is now spending its petrodollars to finance its terrorist war in Yemen.