Beyond the showdown between Washington and Tehran, Thierry Meyssan highlights the profound change in Iran’s behaviour. This country, which used to be very observant of international law, now disregards it, joining the United States and Israel, which have never recognized it. 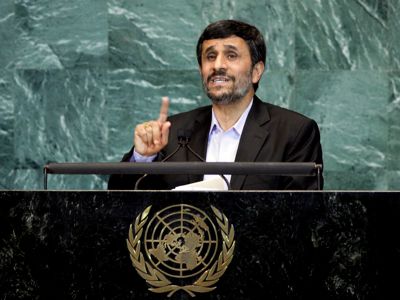 Iran was capturing the world’s attention in its interventions at the United Nations. It held the people’s colours high in the face of imperialism. Nothing remains today of that legacy.
President Mahmoud Ahmadinjed at the podium of the 65th session of the UN General Assembly on September 23, 2010, questioned the official version of the September 11, 2001 attacks in the United States.

The 195 member states of the United Nations claim to want to resolve their conflicts without resorting to war, but to the Law. Since its creation by the Hague Conference of 1899, the Law has been based on a simple idea: just as individuals - including political leaders - agree to protect themselves from civil war by submitting to national law, so states can protect themselves from war by voluntarily submitting to international law.

By "International Law" I mean the procedures that govern relations between States, not those that, from Nuremberg to the ICTY, legalize the judgment of the defeated by their victors.

Three members of the United Nations now display a lack of understanding of international law, while others no longer refer to it and, after having distorted the concept of "human rights" [1], prefer "rules-based multilateralism" [2].

Three States outside the Law

The first is the United States, which since its creation two centuries ago has been a nation "like no other”. According to its national myth, it was a refuge for the puritanical sect of the "Pilgrim Fathers" of the Mayflower and is today a refuge for all persecuted, religious and political. In the name of which they have always refused to apply international treaties in domestic law; judge the behaviour of others severely, but a priori absolve their nationals who act in the same way; and refuse to allow any international jurisdiction to take an interest in their internal affairs [3]. This is the profound reason why they urged other countries to join the League of Nations, but refused to do so. If they accepted the principles of International Law during the Cold War, from the creation of the United Nations to the disappearance of the USSR, they returned as soon as they could to their previous behaviour. Thus, in 1999, they illegally attacked the Federal Republic of Yugoslavia, taking with them their vassals from the Atlantic Alliance. Then, under false pretences, they launched wars in Afghanistan, Iraq and Libya. Their attacks against Iranians in two Middle Eastern countries, Iraq and Yemen, on 3 January 2020, are all equally illegal.

The second was Israel’s unilateral proclamation on 14 May 1948, in violation of the United Nations’ process of partitioning geographic Palestine. For seventy years, Tel Aviv has been watching the Security Council pass resolutions that it flouts. Whenever sanctions are contemplated against it, it can count on the protection of the United States and is not subject to it. It sees itself as eternally threatened and can only survive through war; a cultural position that may come to an end when its citizens defining themselves as Jews (Likud) outnumber those defining themselves as Israelis (White-Blue).

There is now a third: Iran. Historically, Tehran has executed its opponent leaders abroad, all over the world, but never foreign nationals. For example, Shah Mohammad Reza Pahlavi had the philosopher Ali Shariati assassinated in London and then, after 1978, the Islamic government had counter-revolutionaries assassinated in Europe. These murders were never officially claimed. During the war imposed by Iraq, Iran attacked the interests of its enemies abroad; for example, the attack on US and French UN forces in Beirut in 1983. But this was carried out by Lebanese proxies (who later participated in the founding of Hezbollah) and directed against the illegal activities of Hezbollah soldiers (the CIA’s regional secret meeting). However, in the last two years, Iranian forces have several times fired missiles at Israel from Syrian territory without claiming responsibility for it, in violation of the 1973 Syrian-Israeli ceasefire. And this month, missiles were officially fired from Iran at US forces in Iraq, in violation of Baghdad’s sovereignty [4].

The evolution of Iran

How can this evolution be explained, if not by a profound change in Power? Everything began to go wrong at the end of 2013 and since 2017 we have been witnessing demonstrations, not only in Tehran and Isfahan, but throughout the country. Little by little the institutions have been transformed. The judicial system, independent of the executive and legislative branches, has become an organ of political repression [5], going so far as to sentence former nationalist vice-president Hamid Baghaie to 15 years in prison behind closed doors for secret reasons [6] The Guardian Council, which - during the Revolution - was supposed to ensure that foreign agents were excluded from the elections, became an opposition censorship body, going so far as to describe the team of former President Mahmoud Ahmadinejad as "bad Muslims" (sic). Whereas in Islam, the clerical function is to say the law, we are witnessing a takeover of power by a clergy that violates all legal principles.

We have been saying this for 6 years: this has nothing to do with the opposition between pro and anti-Westerners, nor with the question of beliefs. It has to do with the return of the age-old problem of the Iranians: the blind veneration of the clerical function, whatever the dominant faith. There will be no solution without a constitutional separation of civil and religious powers. In all eras, under all kinds of dominant religions, under all kinds of regimes, it has arisen.

I repeat, this has nothing to do with the 1978 revolution, which, contrary to popular belief in the west, was not with the clergy, but against it. Ayatollah Khomeini had been rejected by his peers, who only rallied to him after his victory. They were then zealous to make people forget their previous excesses. If we refer to the already declassified US official documents [7], the then National Security Advisor Zbigniew Brzeziński, considered the clergy as the ally of the US against a Shah who had become too greedy. He organized the return of Imam Khomeini under the mistaken belief that he was like other clerics. He was disappointed as soon as he made his anti-imperialist speech at the Behesht-e Zahra cemetery.

Many actors in the Middle East understood this development, starting with Hezbollah and Syria. They have both distanced themselves from Iran’s domestic politics. In the midst of the war, Damascus did not have an Iranian ambassador for more than a year. Westerners, for their part, did not perceive this change because they were prisoners of their own propaganda against the 1978 Revolution. They interpret the current movements in Iran on the basis of their countless attempts to overthrow the regime and not by observing the behaviour of the Iranians.

The explanations of the USA and Iran before the Security Council

As with every military intervention abroad, after their exchange of bombs, the United States and Iran assured the Security Council that they were acting in accordance with the United Nations Charter.

It makes no reference to the simultaneous assassination attempt on his deputy, the top-secret Abdul Reza Shahlai, in Yemen [9].

It makes a series of accusations against Iran’s allies, but none against the target itself.

President Trump’s accusations of an imminent attack on four US embassies by Soleimani are no longer mentioned. They were moreover refuted by the Secretary of Defense, Mark Esper [10].
The only accusation against Iran itself is the reply of January 7.

The letter of Ambassador Majid Takht Ravanchi is just as absurd [11].

It establishes the legality of an Iranian reply, but not of this reply. Nothing authorizes Iran to strike Iraqi territory without authorization from the government in Baghdad.

Moreover, Iraq immediately protested against the actions of the United States and Iran [12].

The interest of International Law

Many people think that there is no reason to respect the Law if others don’t care. It is that they perceive it as a constraint and not as a protection.

In his Leviathan, the philosopher Thomas Hobbes, who had lived through the English Civil War (1642-1651), showed that individuals must do everything possible to protect themselves from chaos. Those who faced the jihadist armies knew how right he was; others, asleep at night in their comfort, ignored him. Hobbes even went so far as to think that an authoritarian state is better than the torments of chaos. He accepted the drifts of the State, which he compared to Leviathan, the monstrous beast that closes the underworld.

Moreover, there is nothing monstrous about international law. It does not offend any conscience. To deviate from it threatens peace and therefore the lives of all of us.

[8] “US notification of the elimination of Qassem Soleimani”, by Kelly Craft, Voltaire Network, 8 January 2020.