Independent of the questions directly concerning Iran, the United States are worried about the relations that Iran maintains with China. Progressively, Beijing is relying on Tehran to realise its gigantic project for the New Silk Roads in Asia. 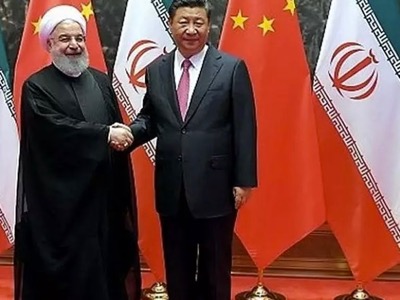 The assassination of Iranian General Qassem Soleimani authorised by President Donald Trump has set in motion a chain reaction which is spreading beyond the Middle Eastern region. This was in the intentions of the person who made the decision. Soleimani had long been in US cross-hairs, but Presidents Bush and Obama never authorised his assassination. Why did President Trump make this decision? For several reasons, among which is the personal interest of the President to dodge his destitution by presenting himself as an ardent defender of « America » faced with a dangerous enemy. The basic reason for the decision to assassinate Soleimani, taken by the Deep State before being taken by the White House, must be sought in a factor which has become critical for US interests only over the last few years – the growing economic presence of China in Iran.

Iran plays an essential role in the New Silk Road launched by Beijing in 2013, currently well under way – it consists of a road and rail network between China and Europe across Central Asia, the Middle East and Russia, combined with a sea route across the Indian Ocean, the Red Sea and the Mediterranean. Investments of more than 1,000 billion dollars are planned for all the road, rail, and maritime infrastructures in more than 60 countries. In this framework, China is making investments of approximately 400 billion dollars - 280 in the oil, gas and petro-chemical industries and 120 in transport infrastructures, including oil and gas pipelines. It is planned that these investments, to be exploited over a five-year period, will later be renewed.

In the energy sector, the China National Petroleum Corporation, a publicly-owned company, received from the Iranian government a contract for the development of offshore drilling of the South Pars/North Dome field in the Persian Gulf, the largest reserve of natural gas in the world. Besides this, with another Chinese company, Sinopec (75% State property), Iran is engaged in the development of the production of the oil fields of West Karoun. Defying the US embargo, China is increasing the import of Iranian oil. Even more serious for the United States is the fact that in these commercial agreements – and others – between China and Iran, there is to be increasing use of Chinese renminbi (yuan) and other currencies, with increasing exclusion of the dollar.

In the transport sector, China has signed a contract for the electrification of 900 kilometres of Iranian railways, in the framework of a project which plans for the electrification of the entire rail network by 2025, and will probably also sign for a high-speed railway of more than 400 kilometres. The Iranian railways are linked to the 2,300 kilometre line which already connects China and Iran, reducing the merchandise transport time to 15 days instead of 45 days by maritime transport. Via Tabriz, a large industrial town in the north-west of Iran – the starting point of a 2,500 kilometre gas pipeline which arrives in Ankara in Turkey – the transport infrastructures for the new Silk Road could thus connect with Europe.

The agreements between China and Iran do not plan for military components, but according to an Iranian source, in order to guard the sites, they do plan for approximately 5,000 Chinese guards, employed by the construction companies for the security services. It is also significant that at the end of December, the first naval exercise between Iran, China and Russia will have taken place in the Gulf of Oman and the Indian Ocean.

Taking these facts into account, it is not difficult to see why Soleimani’s assassination was decided in Washington – it was planned to provoke a military riposte by Tehran in order to tighten the stranglehold on Iran and justify an attack, and also to hit the Chinese project of the New Silk Road which the USA does not have the means to oppose in the economic sector. The chain reaction triggered by the assassination of Soleimani will also implicate China and Russia, creating a situation which is becoming increasingly dangerous.