Pirates of the Indian Ocean

Officially present in order to combat piracy in the Indian Ocean, NATO forces are themselves behaving like pirates with military blunders that cost the lives of innocent fishermen, protection of industrial fishing fleets which deprive local fishermen of their stocks and protection of those dumping waste that destroys the environment. The fight against piracy is clearly more complicated than meets the eye… 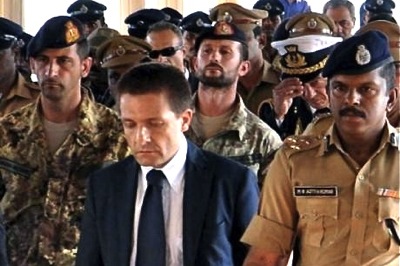 Binding Scipio’s helmet upon their heads [1], the multi-partisan deployment has come to the rescue of two marines from the San Marco Battalion accused by the Indian judiciary of shooting at fishermen whom they had mistaken for pirates - killing two.

Dozens of municipalities responded to the patriotic call of Ignazio La Russa  [2] by displaying a banner reading “Save our sailors”. Journalists from Tg1 [3] raised the military boat’s yellow flag bearing the message “No men left behind!”.

And indeed they were not abandoned. Thanks to the unremitting pressure put on the Indian authorities by Italian Prime Minister Mario Monti and Giampaolo Di Paola, the Defense Minister, as well as the “donation” of no less than 146,000 euros (in Rupees) to the families of those who were killed (termed by Di Paola as an “act of generosity”), “our marines” have been freed [4] This happened just as the military parade in Rome was taking place on 2 June [5] that President Giorgio Napolitano had wanted in order to “honour the Italians who have sacrificed their life for international peace missions”.

This refers to missions such as those where marines forming a “military protection cell” are deployed aboard Italian merchant ships in the Indian Ocean. These cells enjoy an “adequate degree of operational independence” – they are able make independent decisions about when and how to shoot. This veritable license to kill was endowed upon them by the Parliament and had its scope broadened by the Law 130/2011 to include contractors of private companies who may “use arms provided aboard merchant ships thanks to preliminary authorization of the (Italian) Interior Minister”. These actions were placed under the NATO operation Ocean Shield whose official purpose is to “combat piracy the length of the coast of Somalia and the Horn of Africa”. [6]

The operation consists of two multinational naval groups from NATO’s Immediate Reaction forces and these are permanently deployed in the Indian Ocean under the Allied Maritime Command from Naples. Ocean Shield is itself linked to the CMF – a multinational maritime force made up of 36 warships (with aerial support) which falls under the orders of the naval component of the US Central Command in Bahrain [7] Its mission is to “combat terrorism and piracy in the international waters of the Middle East, which are host to some of the world’s busiest oceanic trade routes”.

The true purpose of this large naval deployment (in which Italy is also involved) is in fact to gain control of oil shipping routes, whilst at the same time preparing for new wars in order to dominate the region. This comes under the pretext of counter-piracy. Parallel to it, the very same powers that are providing military supervision in the Indian Ocean continue plundering the waters of Somalia (and other countries) with their fishing fleets, and allowing their poisoned boats to dump toxic waste from the rich [8] This has provoked famine and illness which in Somalia has struck off the map entire fishing villages and forced many young people to work as labourers in acts of piracy in order to survive.

Others still, such as the Indians who the marines shot at, are forced to risk their lives for just a few Rupees in the hope that if they are shot down, their families will be compensated by the “generosity” of the institutionalized pirates.

[2] Ex-Minister of Defense of the last Berlusconi government.

[4] The Kerela Supreme Court released them on bail in exchange for certain guarantees. The Italian marines are not permitted to leave the State of Kerela before their trial.