The preparation for Russian military deployment in Syria continues

A campaign has been launched by the opponents of the agreement between the United States and Iran accusing Russia of intending to annex Syria by military force, as it had done in Crimea. In reality, Moscow is applying UNO resolutions and preparing an operation against the jihadists, and will go ahead with or without the consent of Washington. Already, the White House has organised a joint operation by the international Coalition and Syria. France is attempting to jump on the bandwagon, hoping at the same time to sabotage the US / Iran reconciliation. 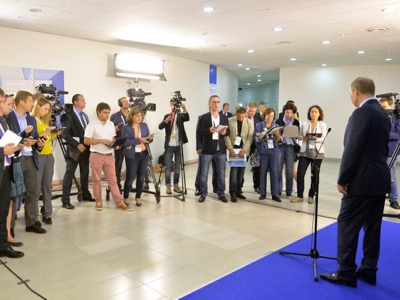 On the fringes of the Economic Forum in Vladivostok on the 4th September 2015, President Vladimir Putin confirmed his intention to intervene in Syria against the jihadists.

The preparation for Russian military deployment in Syria continues, provoking the anger of the West. The announcement that I made in my weekly chronicle for Al-Watan [1] - which concerned the creation of a Joint Syro-Russian Military Commission, the transmission of Russian satellite intelligence, the arrival of numerous Russian experts, and the delivery of weapons which are more sophisticated than in previous deliveries - caused a storm when it was confirmed by the Israeli sites Ynet [2] and DebkaFile [3]. I later added the modernisation and extension of Lattakia airport [4].

However, yet again, the Israeli journalists have distorted reality. They led the reader to suppose that Russia was going to deploy its aviation and its infantry to defend a Syrian government which was close to defeat. Certain commentators, noting the possible transfer from Sebastopol of the 810th Brigade of the Russian Marines, mentioned the example of Crimea, and spoke of a possible Russian military annexation of Syria [5].

Numerous Atlantist TV channels broadcast a video of the combats in Lattakia, in which we apparently hear officers of the Syrian Arab Army speaking Russian. According to Yuri Artamonov, analysis of the background noise of gunfire validates the conclusion that these voices are not those of Syrian troops, but the jihadists they are fighting [6]. We have long noted that most of the officers of Daesh communicate by walkie-talkie in Turkish and Russian, and not in Arab.

So all this, of course, is a lie. The Russian Federation continues to seek a political solution to the inter-Syrian conflict by organising a dialogue between the government and its opposition, thus applying the Geneva Communiqué of the 30th June 2012 [7].

Simultaneously, responding to the appeal by the Syrian Arab Republic within the framework of the pertinent resolutions of the Security Council, the Russian Federation is considering following the example set by the US-led Coalition against Daesh, and launching its own operation against the jihadists.

Russia so informed the United States emissary, Michael Ratney, during his journey to Moscow on the 28th August [8]. Besides this, Sergey Lavrov has publicly called for coordination with the United States Army in order to combat the jihadists [9].

And this is precisely what scares the Petraeus-Allen-Clinton-Feltman-Juppé-Fabius clan. In Syria, there is a gulf between reality and media fiction, and as always in this type of situation, with the passage of time, the producers of propaganda become ensnared in their own rhetoric and, finally, are intoxicated by their own lies.

The Russian Federation is not planning to « reduce » Daesh, but to vanquish all jihadists, whether they claim to be members of the Islamic Emirate, al-Qaïda, the Islamic Front or any other organisation. As a result, everyone now realises that there is no armed anti-government group which is not linked to the jihadists. This is true to the point that the Pentagon recognises that it has no further conatct with the « moderate rebels » which it had formed to fight against Daesh, because all of them without exception have now joined al-Qaïda. The Syrians who had joined with foreign combatants at the beginning of the war have now reintegrated the Republic, via the numerous reconciliation agreements which have been implemented by the government over the last three years, or else have adopted the objectives of the jihadists.

Consequently, if they decide to act, the Russians will be attacking all of the armed groups which are currently spreading terror in Syria. The West will no longer be able to hide the fact that the « National Coalition of Opposition and Revolutionary Forces », which they recognised as the representatives of the Syrian people, in fact supports the jihadists. They will therefore be obliged to take into consideration the political parties of Syria, including those who are allied with the Baath party to fight the jihadists.

The Western powers, who closed their embassies and thereby deprived themselves of all possibility of analysing what is going on in the country, have committed several errors of judgement. They know nothing about how Syrian society has been transformed by four years of war.

First of all, while there is of course a certain amount of political conflict in Syria, there is no civil war. Almost all citizens positioned themselves behind their President el-Assad against the foriegn aggression which threatens the survival of the Levant.

The Atlantist Press estimates that the régime only controls 20 % of its territory, and that it will soon collapse. Of course, inhabitable Syrian territory is restricted, while the desert is vast. The Republic chose to defend its populations rather than its territory, with its fields of much-lusted-after gas and oil. From the governmental point of view, 20 % of the population has been obliged by the fighting to seek refuge abroad, 75 % is under the protection of the Republic, and a maximum of 5 % occupies the vast territories controlled by the jihadists.

Secondly, while in 2011 many people still believed in the myth of the « Arab Spring », this is no longer true today. The State Department’s project to install the Muslim Brotherhood in power throughout the Arab world has fizzled out. The Egyptian scenario acts as a foil. Following operation « Damascus Volcano » of July 2012, the conflict has become a jihadist war. The choice is no longer for or against the Baathist Nationalist Party, but for or against modernity. The jihadists defend a model of society governed by polygamous males, in which women can leave their homes only if they are veiled and escorted by a man of their family, in which homosexuals are put to death, in which only Islam is authorised, and in which Wahhabist practises are obligatory. It is already surprising that 5 % of the population accept to live in zones occupied by jihadists, and it is absurd to hope that their number may grow [10].

By clinging to the myth of the « Arab Spring », which they themselves created and then destroyed, the Western powers have lost touch with reality. They pretend to be supporting a democratic movement hostile to President el-Assad. But apart from the fact that in time of war, democracy looks like a luxury, not only do the democrats support President el-Assad against the jihadists, but he appears to be their safest bet.

By drawing its information exclusively from the Syrian Observatory for Human Rights, the Atlantist Press has chosen to intoxicate itself and public opinion. The SOHR is not a neutral association, but a propaganda arm of the Muslim Brotherhood, which is the matrix for all jihadist groups. All their leaders are either present members or ex-members of the Muslim Brotherhood, from Ayman al-Zaouahiri to Zahran Allouche. Today, the Western powers are paying the consequences of four years of propaganda.

The case of France

President Hollande has announced that he will authorise his troops to fly over Syrian territory in order to accumulate information about Daesh, and that later, he may authorise them to bomb the jihadist organisation.

This announcement seems like a desperate piece of pantomime. Indeed, François Hollande justifies his statement by stating the impossibility of fighting effectively against Daesh by bombing them only in Iraq ; but this is precisely the argument which President Obama had used to convince him in 2014, and which he had at that time rejected. In the same way, he is bragging rather ridiculously when he claims that these airborne operations had begun on the 8th September - on that day there was a sand-storm of historic proportions over all the Near East, which disabled electronic navigation systems and made it impossible for aircraft to take off. Above all, he shows rare bad faith by declaring that the Syrian Arab Army will not destroy French aircraft because they no longer control the North of the country, while he had in fact secretly sent a military ambassador to Damascus in order to obtain permission to make the necessary flights.

Obama pursues the application of the Lausanne agreement

However, it seems that France has calculated the consequences of the agreement signed by Washington and Teheran on the 14th July in Lausanne, and does not wish to be left isolated in a Near East which is in a state of total reorganisation.

While the international anti-Daesh Coalition has made absolutely no stand against the Islamic Emirate over the last year, either in Iraq or in Syria, but on the contrary, has dropped massive and repeated supplies of arms to them, President Obama gave the order that it should help the Syrian Arab Republic to defend Al-Hasakah.

On the 27th and 28th July, the two forces joined to push back Daesh. Coalition bombings killed about 3,000 jihadists.

Logically, the next stage should be to include Russian Forces in the anti-Daesh Coalition, but it seems improbable. Indeed, the US and French officials who are opposed to peace with Iran mean to spread the chaos not only to the Levant, but also to North Africa and the Black Sea. These are the same people who are accusing Russia of wanting to « save Assad » from the « Arab Spring ». So we shall probably witness the bombing of Daesh by two distinct Coalitions, or even, in the long run, a differentiation of the roles, where the United States takes care of Iraq and Russia takes care of Syria.

Russia is preparing to fight against Daesh in Syria, but not against the democratic opposition.

In four years of war, Syrian society has undergone a profound change. The choice today is no longer for or against President el-Assad, but for or against the model of society imposed by the Muslim Brotherhood.

There remains no armed anti-Assad group which is not connected to the jihadists.

After the signing of their agreement with Iran, the United States launched a joint operation with Syria against the jihadists at Al-Hasakah.

France sent a secret military ambassador to Damascus at the beginning of September, and obtained permission to overfly the territory.

[3] “Russia gearing up to be first world power to insert ground forces into Syria”, DebkaFile, September 1, 2015.