In a Europe closed down by the Coronavirus, the EU opens its doors to the US army

30,000 US soldiers are currently disembarking in the European Union without respecting the sanitary measures ordered by Brussels and the member States. Either the command of the US Army Europe is incompetent and is putting its soldiers needlessly in harm’s way, or else they have already been vaccinated. 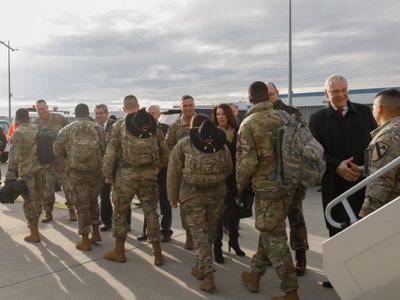 The Bavarian Minister for the Interior, Joachim Herrmann, greets the first US soldiers to arrive in Europe (Nuremberg, 3 March 2020)

The Ministers for Defence of the 27 countries of the EU, 22 of which are also members of NATO, met on 4 and 5 March in Zagreb, Croatia. The central theme of the meeting (in which Lorenzo Guerini of the Democratic Party represented Italy) was not to seek a response to the Coronavirus crisis which is jamming up civil mobility, but how best to develop « military mobility ». The decisive test is the Defender Europe 20 exercise, scheduled for April and May. The General Secretary of NATO, Jens Stoltenberg, who took part in the EU meeting, défines it as « the largest deployment of US forces in Europe since the end of the Cold War ».

The 20,000 soldiers who, with 10,000 others already on site, and 7,000 NATO allies, are presently arriving in Europe from the USA, informs the US Army Europe. They are to deploy « throughout the European region ». The US forces are bringing with them 33,000 pieces of military equipment, from personal weapons to Abrams assault tanks. It is obvious that they will therefore need adequate infrastructures for their transport. But there is a problem, as revealed by a report by the European Parliament (February 2020): « Since the 1990’s, European infrastructures have been developed only for civil usage. However, military mobility has become a key question for NATO. As the Alliance lacks the tools to improve military mobility in Europe, the European Union, which does possess the legislative and financial tools to do so, plays an indispensable role ».

The Action Plan on Military Mobility, presented by the European Commission in 2018, plans to modify «those infrastructures which are not adapted to the weight and dimensions of military vehicles ». For example, if a bridge is unable to support the weight of a column of tanks, it must be reinforced or rebuilt. On the basis of this criterion, the test for the strength of the new bridge, which in Gênes will replace the collapsed Morandi bridge, will have to be carried out with Abrams tanks weighing 70 tonnes each. These modifications, which are useless for civil purposes, will require massive expenditure to be assumed by the member countries, with a « possible financial contribution by the EU ».

The European Commission has provided for a primary allocation of 30 billion Euros – this is public money taken from our pockets. The Plan also intends to « simplify the Customs formalities for military operations and for the transport of dangerous military-style merchandise ».

The US Army Europe has demanded the institution of a « Military Schengen Zone », with the difference that it will not be people who will be allowed to travel unhindered, but tanks.

The Defender Europe 20 exercise - as was explained during the meeting in Zagreb – « will enable the identification of all obstacles to military mobility, which the EU will have to remove ».

The transport network of the EU will therefore be tested by 30,000 US soldiers, who will « deploy throughout the European region », exempted of the Coronavirus standards. This is confirmed by a video showing the first 200 soldiers of the US Army Europe arriving in Bavaria on 6 March. While in Lombardy, only a few hundred kilometres away, more severe standards are in place, in Bavaria, where the first European outbreak of Coronavirus was noted, US soldiers just off the plane shook hands with German authorities and kissed the comrades without any masks. Spontaneous question – could they already be vaccinated against the Coronavirus?

Besides, we might ask ourselves what could be the purpose of « the largest deployment of US forces in Europe since the end of the Cold War », officially to « protect Europe from any potential threats » (with a clear reference to the « Russian menace »), at the moment when Europe is in crisis because of the threat of the Coronavirus (there is even one case at NATO headquarters in Brussels). And since the US Army Europe informs us that « movements of troops and equipement in Europe will last until July », we can only wonder if all of the 20,000 US soldiers will go back to their Homeland, or will some of them stay behind with their weapons. Could the Defender become the Invader of Europe?

Source : “In a Europe closed down by the Coronavirus, the EU opens its doors to the US army”, by Manlio Dinucci, Translation Pete Kimberley, Il Manifesto (Italy), Voltaire Network, 15 March 2020, www.voltairenet.org/article209469.html

Source : “In a Europe closed down by the Coronavirus, the EU opens its doors to the US army”, by Manlio Dinucci, Translation Pete Kimberley, Il Manifesto (Italy) , Voltaire Network, 15 March 2020, www.voltairenet.org/article209469.html

“The Art of War”
30, 000 soldiers arrive in Europe without masks