Press conference by the Russian assistant Minister for Defence


Russia shows proof of petrol trafficking by Daesh via Turkey

In response to the provocations of the Turkish President, Recep Tayyip Erdoğan, according to whom accusations should not be made lightly, the Russian government organised a Press conference by their assistant Minister for Defence. He presented proof that we have been publishing in our columns for more than a year – that Turkey, as a state, is responsible for the export of petrol stolen by Daesh in Iraq and Syria, thus offering between one and two billion dollars of annual revenue to the terrorist organisation. This traffic continues in violation of the pertinent resolutions of the United Nations Security Council. 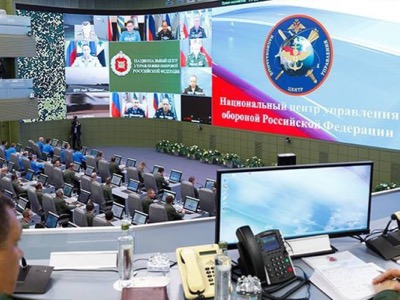 According to the commanders of the Russian army, the main source of finance for the terrorists of the Islamic Emirate is the illegal sales of petrol products, and the only beneficiary of this petrol smuggling operation is Turkey [1]. According to the Russian generals, the political directors of Turkey, via the family of President Recep Tayyip Erdoğan, are implicated in the trafficking of contraband by the Islamic Emirate [2]. 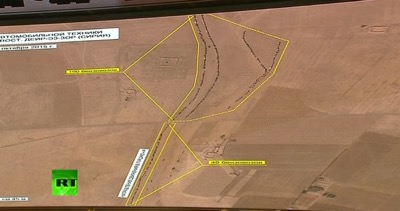 Every day, more than 8,500 tanker trucks are implicated in the trafficking of petrol by the Islamic Emirate, a long column transporting more than 200,000 tons of petrol into Turkey. The Russian generals presented a map showing the three main routes by which the IE smuggles petrol from Syria and Iraq into Turkey. 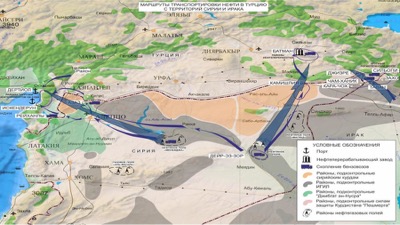 The first route, leaving the oil-fields of Raqqa (north-east Syria), passes through western Syria, where the Russian Su-24 was shot down, and where, on 25th November 2015, surveillance satellites photographed 395 tanker trucks waiting to unload Syrian petrol in the port of Dörtyol, and 60 others in the port of Iskenderun. The Russian generals estimate that an oil tanker full of smuggled petrol leaves Turkish ports every 24 hours. 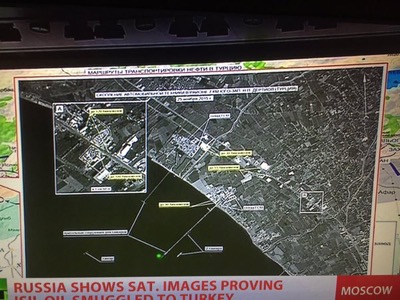 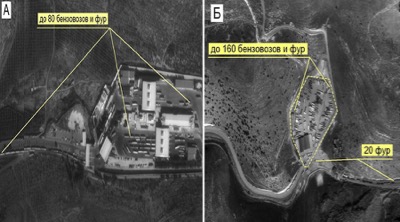 Despite the fighting to the north of the province of Aleppo, the circulation in both directions (to and from Syria and Turkey) continues uninterrupted. It can be observed that there is no control by the Turkish border guards for the IE petrol convoys coming from Syria.

Despite the Coalition bombing led by the USA, last year’s earnings by the terrorist organisation were around 3 million dollars per day. For two months, Russian aviation has carried out air-strikes on 32 petrol complexes, 11 refineries, 23 pumping stations and 1,080 tanker trucks transporting petroleum products. The result for the IE is a loss of 1.5 million dollars per day.

However, the terrorist organisations operating in Syria still receive important sums of money, arms and munitions from the exterior. Turkey, as well as other states, widely supports the terrorists of the IE. Perhaps a part of the payment for the petrol delivered to Turkey over the last week has served to send 2,000 combatants, 120 tons of ammunition and 250 combat vehicles to the IE and the al-Nusra Front. The regular deliveries to Turkey have been going on for 3 to 4 years, and there is no indication that Turkey wants them to cease.

[1] “Behind the anti-terror alibi, the gas war in the Levant”, by Thierry Meyssan, Translation Roger Lagassé, Voltaire Network, 3 October 2014.